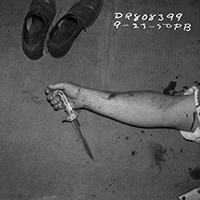 There was a lot of inspiring (and expensive) work at the second Paris Photo Los Angeles, but the images that had people lining up weren’t artsy or avant garde. They were photos that were shot decades ago by staffers working for the Los Angeles Police Department.

As part of Paris Photo, Fototeka hosted Unedited! The LAPD Photo Archives, a fun, noir-ish, exhibition of more than 80 crime-related photos that were shot between 1925 and the mid-1960s. Macabre? Maybe, but with enough time and distance, even gruesome scenes can become art.

Put together by Julien Frydman, director of Paris Photo, along with Robin Blackman and Merrick Morton of Fototeka, the pictures were culled from a repository of more than one million images that reside at the City Records Center in downtown.

The photos are a time capsule of Los Angeles, like movie stills from another era. Though they were shot by police officers and criminologists rather than professional photographers, the compositions are artful–whether or not that was intentional. Even more remarkable, the images feel modern despite the half-century that has gone by.

The show includes images from notorious cases like the Black Dahlia, the Onion Field killings, and the Manson Family murders, but one of my favorites comes from a long forgotten heist that clearly didn’t go as planned. It’s a shot of a note that reads, “BE CALM AND I WON’T SNOOT.” As my district attorney sister says, “We never catch the smart ones.”