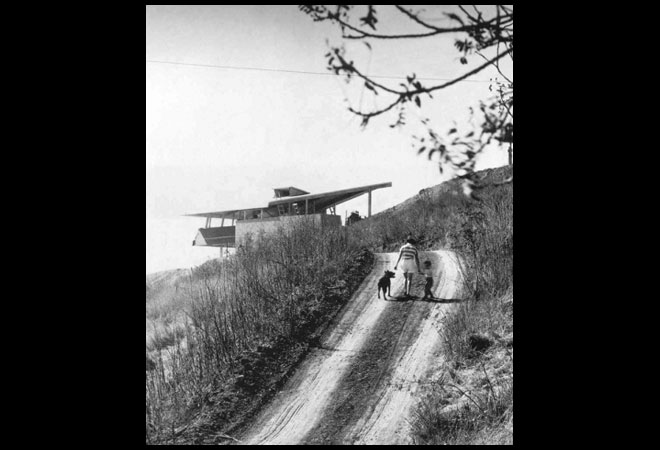 Crestwood Hills is featured in "Overdrive," part of the PST survey on L.A. architecture

In 1946, four studio musicians decided to build their own slice of utopia in Brentwood. Spread across 835 acres, the Crestwood Hills development boasted a communal nursery, preschool, and credit union. The 160 houses, designed by a team of lauded midcentury architects that included A. Quincy Jones, were modest in size, but they elevated low-cost materials like concrete blocks and plywood into sophisticated post-and-beam jewel boxes.

The far-reaching show Overdrive: L.A. Constructs the Future, 1940-1990, opening today at the Getty, celebrates not only Crestwood’s co-op village, but also Richard Neutra’s glass box houses in Silver Lake and Frank Gehry’s titanium-clad Walt Disney Concert Hall downtown. Overdrive is one of 17 museum and gallery events featured in Pacific Standard Time Presents: Modern Architecture in L.A., a multi-institution collaboration that promises to do for midcentury structures what its similar-sounding 2011 counterpart did for art.

From the neon-drenched photos of 1940s streets in the Huntington’s online archive to a gritty mile of Beverly Boulevard projected on a wall at the A + D Museum to the Los Angeles Conservancy’s electronic guide to local gems, the shows exemplify how L.A.’s quirks influenced architecture worldwide. For pure populism there will be a dedicated CicLAvia walking and cycling tour among the mishmash of building styles along Wilshire Boulevard.

Nature was ultimately not kind to Crestwood Hills; 45 of its reasonably priced homes—they originally sold in a heartbeat for $10,000 to $18,000 each—were ravaged in the 1961 Bel-Air fire. Others underwent extensive remodels. But that forward-looking spirit is enjoying one unplanned irony: The 31 unmodified homes still left are valued at upwards of $2 million. That might be a real estate agent’s idea of utopia after all.