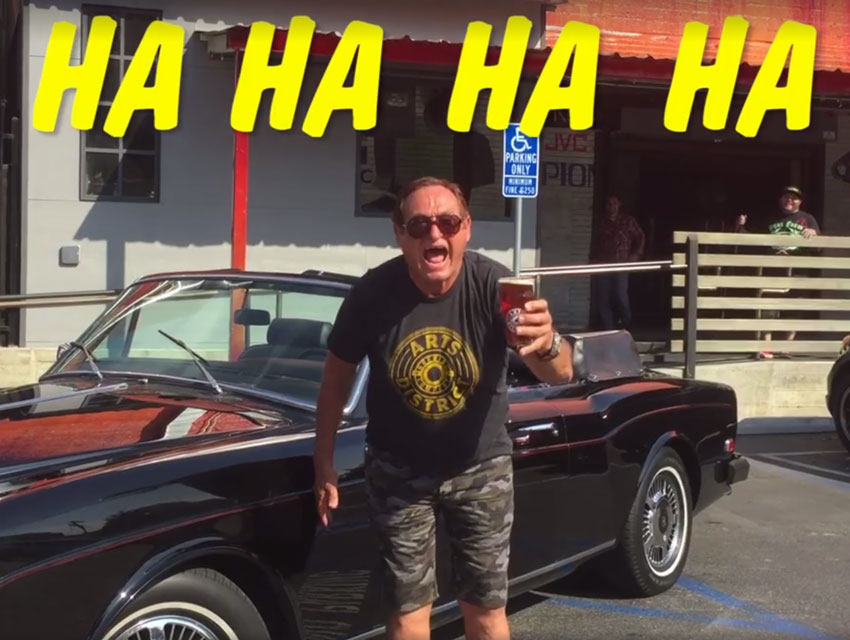 Remember those Crazy Gideon commercials? The ones with the Israeli dude shouting things like “IF YOU DON’T BUY FROM CRAZY GIDEON, YOU HAVE A PROBLEM WITH YOUR HEAD” and “I’M INSANE” while hitting himself in the face with a VCR? It was the early aughts, and Gideon Kodzer was at his artistic prime, churning out lo-fi TV spots for his massive Arts District electronics warehouse. His ads had roosters. They had straitjackets. They had out-of-date PCs. They were everything late-night, local commercials should be.

But in 2010, the glory days came to an end. Gideon closed up shop and eventually handed his space over to 213 Hospitality. They converted it to Arts District Brewing Co., swapping the racks of dialup modems and shelves of cordless phones for ski ball lanes and craft IPAs on tap. Crazy Gideon’s filmography was relegated to the back pages of YouTube, all but forgotten. Until now.

Head brewer Devon Randall has pioneered Arts District Brewing Co.’s first Double IPA and named it “Crazy Gideon” in honor of their landlord. She previewed the brew at L.A. Beer Week, but it makes its debut at the bar in Gideon’s old digs next Wednesday, August 10. The best news in all of this, though, is that there is a new Crazy Gideon commercial on the internet to promote the beer. And yes, there is as much yelling, tasteless font choices, half-assed editing, yelling, breaking things, and yelling as ever.