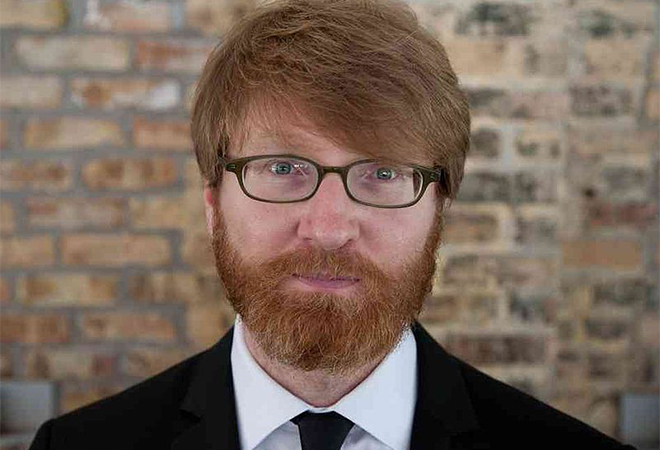 Tomorrow (July 17), Chuck Klosterman is coming to Skylight Books to talk about his new essay collection, I Wear the Black Hat: Grappling with Villains (Real and Imagined), featuring a diverse guild of calamitous intent (of varying degrees) that includes Machiavelli, Hitler, D.B. Cooper, O.J. Simpson, Batman, Bernhard Goetz, Omar from The Wire, the Oakland Raiders, and The Eagles. The 41-year-old North Dakota-bred critic and New York Times Ethicist starts with the kinds of questions recognizable from late-night barroom debates but carries these conundrums and conjectures into places that are introspective and digressive, astute and humorous, uniquely Klostermanic. Or should that be Klostermaniacal? (Discuss.)

For some readers and critics, Klosterman’s hyper-referentiality, jokiness, and taste in music have made him something of a black hat. He enjoys turning over as well as overturning cherished pop-cultural preconceptions. Over the years, Klosterman has pondered why there is no Lester Bangs or Pauline Kael of video-game writing; rummaged around in R. Kelly’s Trapped in the Closet; reviewed the Beatles Anthology as if it were the Fab Four’s first release; and along with Alex Pappademas contemplated the death of David Bowie too soon.

Want to attend the reading and sound S-M-R-T? Time is short, so we’ll focus on the essays and consider his novels (Downtown Owl, The Visible Man) extra credit. Whether you want to pull an all-nighter or familiarize yourself with his work prior to his Skylight appearance, here’s a Klosterman (pronounced, by the way, “kloh-ster-man”) study guide.

For Klosterman, feeling trumps attitude. Like any critic, he’s made his share of excoriating assessments of certain artists but has often returned to those dismissive moments in his essays to ask why we are determined to make—and defend—such declarations.

Authenticity
“If you want to adopt an unnatural persona, that persona needs to be an extension of the person you secretly feel like. You have to be ‘authentically pretending.’ You have to be the only person who could have become the character you embody.” (“The Passion of the Garth,” § 2C)

Klosterman has made many forays into the realm of the “authentic” but the definitive text is his study of Garth Brooks’s alter ego Chris Gaines.

Be prepared to discuss the recurring figure of the artist (or athlete) for whom a certain kind of failure is crucial. “Losing isn’t everything,” he stated in one ESPN Page 2 column. “Losing is the only thing.”

Billy Joel
Klosterman has devoted more time to thinking about the Piano Man than any pop-music critic born after 1970 and is a serious advocate for The Nylon Curtain (especially “Where’s The Orchestra?” and “Laura”).

The Unabomber
One of Eating the Dinosaur’s best essays is an examination of Ted Kaczynski and his “Unabomber Manifesto.” “Writing about Kaczynski’s merits as a philosopher is kind of like writing about O.J. Simpson’s merits as a running back—at first it confuses people, and then it makes them mad.” I Wear the Black Hat picks up where this essay left off.

Sex, Drugs, and Cocoa Puffs
“Every Dog Must Have His Every Day, Every Drunk Must Have His Drink” (Billy Joel and coolness); “Appetite for Replication” (tribute bands); “Being Zack Morris” (Saved by the Bell); “The Awe-Inspiring Beauty of Tom Cruise’s Shattered, Troll-like Face” (Vanilla Sky, Memento, and other mind-benders)