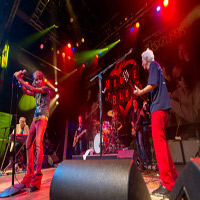 Thursday night at the House of Blues in Hollywood Jim Morrison rose from the dead. He was alive and well, wearing aviator sunglasses and glaring out at the crowd from Robby Krieger’s dark blue t-shirt. It was a beautiful way to kick-start the 8th Annual Sunset Strip Music Festival.

Krieger, the Doors’ guitar player, was joined on stage by the band’s keyboardist, Ray Manzarek, who proclaimed, “In primitive cultures, there’s something called the axis mundi, it’s the center of the earth, the center of your tribe, the center of your existence around which everything swirls. So for The Doors, the Whiskey a Go Go and The Sunset Strip are the axis mundi of our lives. And this guy right here [Robby Krieger] wrote Light My Fire!” Along with a handful of other musicians — Franky Perez, Mark McGrath, Linda Perry, to name a few — they cruised through a blistering six-song set that included the hits “Light My Fire,” “Break on Through,” and “LA Woman,” leaving the audience practically begging for more.

Luckily, there will be more this weekend. Lots more. Not only will the remaining members of the Doors join Marilyn Manson on stage on Saturday night. As this year’s festival celebrates the legendary rock band from Los Angeles, it’d almost be rude to not cover a Doors song. Kind of like showing up to a wedding without a gift. Here are our picks (in no particular order) for the 5 Bands That Will Belt out the Best Doors Cover tomorrow.

Lead singer Emily Armstrong crushed her raspy rendition of “Soul Kitchen” at the opening tribute. Without a doubt, she needs to repeat it on Saturday.

Self proclaimed “collaborators,” this talented and diverse eight-piece band from Los Angeles brings an element of “LA Cool” to any Doors cover they choose.

These guys have been around long enough to have mastered many Doors songs; you’d be crazy to assume they don’t have a sleeve full of material from the books of Jim and the gang.

We’ll let Manson do his own talkin. On Thursday night he said, “If it weren’t for the Doors, I would not be where I am today. That may be a good thing or a bad thing, but for what it’s worth the Doors have really been the one band that has created and galvanized in my mind the template for what rock stars really should be.”

We’re going to throw a curveball and predict that DJ Steve Aoki will throw together some terrific Doors compilations on Saturday. It’ll be cool to hear the reverberating tones of the “real” Jim Morrison on the Sunset Strip once again.