Home Art This Tattoo Artist Is the Queen of Turning Bad Ink into Good... 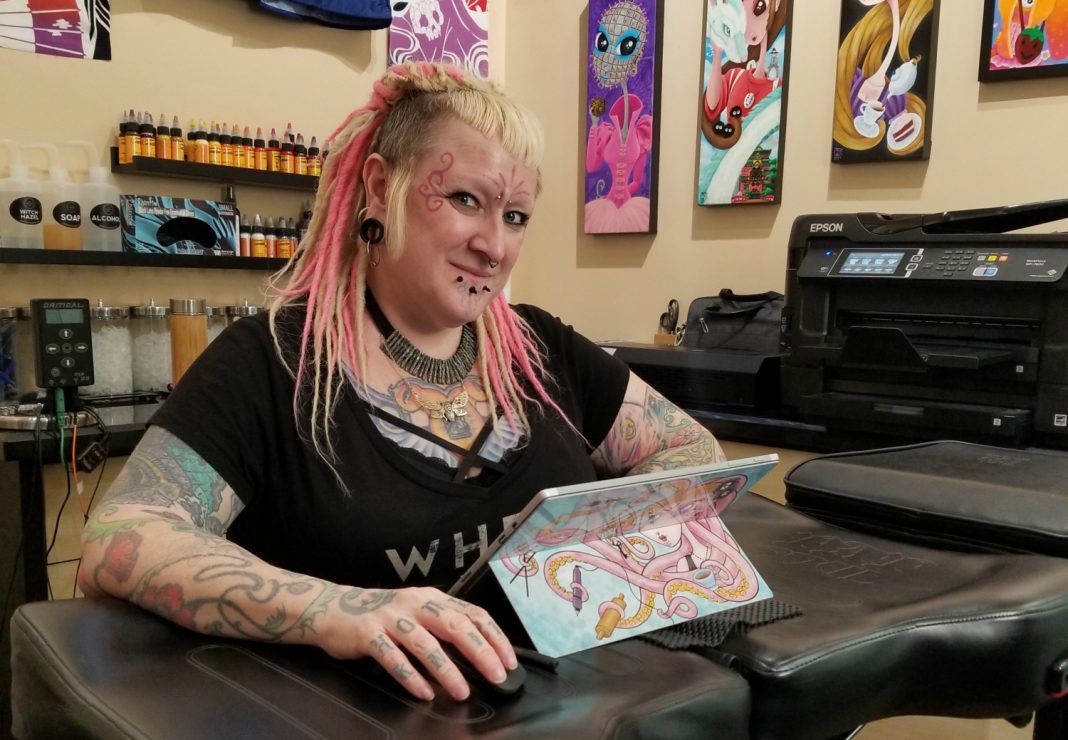 “It was supposed to be a galaxy,” Misha says of the most challenging tattoo she was tasked with covering up. It didn’t look much like a galaxy. Instead, on her client’s upper arm, there were swirls of purple and blue colliding with patches of black ink. A fiery, comet-like streak of red darted through it.

It could have been an impossible task, but Misha realized that the black ink was washed out enough where it could be covered. She worked with images the client liked—crystals, succulents, a cow skull—and was able transform it into a Western garden. The piece is still a work-in-progress, but the tattoo artist cites it as one of her favorite projects.

At Tattoos by Misha, located inside Hollywood’s Salon Republic, cover-ups account for approximately 40 percent of the business. Cover-up tattoos can take many different forms, from turning a scar into a flower to transforming a tattoo mishap into the wearer’s original vision. And Misha, who only uses her first name professionally, is the “Countess of Cover-ups.” She’s had people from as far away as Chile stop by for fix-it work. It’s not just that she’s extremely skilled at masking old ink and camouflaging scars, it’s that she loves the work. “The uglier, the more horrible, the more impossible it seems,” she says, “the more fun it is to figure it out.”

It wasn’t always that way for Misha, who has been tattooing since 1991. For years, cover-ups were a “necessary evil.” Then, in 2012, when she was working at Zulu Tattoo in Hollywood, a client came in looking to cover up a tattoo that had already been revamped multiple times. Misha asked what the client would want if the piece were on bare skin and the client mentioned either a raven or a phoenix. That prompted the artist to recall a Terry Pratchett story where a phoenix hid amongst ordinary birds, which inspired the new work: a raven that’s transforming into a phoenix.

“I had been going about the cover up process entirely wrong,” Misha says. “I’ve been thinking about it as a problem as opposed to thinking of it as a puzzle. As soon as it became a puzzle, it became fun.”

Designs with feathers, fur, fins, flowers, and/or rocks all help cover old tattoos, Misha says. She’ll often use colors that are lighter than one might expect. All this helps distract the eyes from the old tattoo. The goal: Give someone a cool piece of skin art, not just a permanent Band-Aid.

There are a lot of reasons that people consider cover-up tattoos. Sometimes it’s to cover scarring. Other times, the tattoos haven’t aged well. Perhaps it was always an eyesore. In some instances, too, there’s nothing wrong with the ink, it’s just that it represents a life chapter that someone wants to close. The question that Misha asks—What would you want if there was no tattoo or scar to cover?—is crucial. The answer doesn’t just help with the design process, but let’s the artist know whether or not the person really wants a tattoo.