Home Uncategorized Counting Crows (and Friends) at the Greek 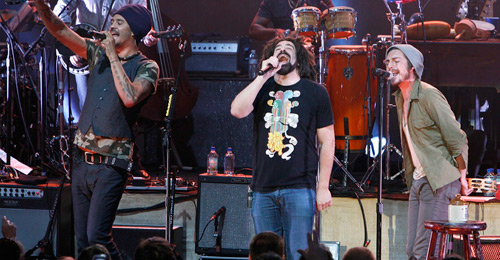 I went to the Greek Theater last Tuesday evening expecting a Counting Crows concert, complete with all my old favorites—“Mr. Jones,” “Round Here,” and “Omaha,” to name names. That’s not what I got. When the curtains (or rather, khaki colored burlap covers tied with rope) were lifted, I was met with the “Traveling Circus and Medicine Show,” featuring the Crows, Augustana, and Michael Franti and Spearhead, along with all their respective musicians and instruments. The three bands opened the show with Van Morrison’s “Caravan,” and continued on together for several numbers before Counting Crows front man Adam Duritz sat down at the piano for his slow ballad, “Long December.” Needless to say, I was a bit confused.

After a couple more numbers, Duritz explained the philosophy behind the show. Wanting to bring together multiple musical genres, he set out to create a tour that would involve collaboration and creativity, with each artist’s music complementing and enhancing the next. Surprisingly, Tuesday night’s performance accomplished exactly that, with three hours of musician-trading, stellar back-up vocals (involving all 3 lead singers), impromptu band covers, and plain old fun: the musicians looked like they were having the best time, and so was the audience.

Despite the group spirit, each band also played their biggest and most recent hits. Before beginning “their” set, Augustana frontman Dan Layus remarked that it was tough following Spearhead and the Counting Crows on stage, “and that’s why we’re usually the opening band… I don’t know why the f–k they’re letting us play in the middle of their set.”

Actually, Counting Crows’ hit “Rain King,” performed toward the end of the show, might explain why the concert experiment worked. Some of the song was performed a capella, other parts were sung by Layus and Spearhead’s Michael Franti, with Duritz leaping about on stage. It broke down into the Beatles’ “All You Need is Love,” and then smoothly transitioned back to “Rain King”—all with audience participation.

In the end, I was happy I didn’t see Counting Crows, as originally planned. I experienced music, and a new kind of unorganized, unplanned music at that.