Home Film Counter Programming: Two Rock Docs, Both With a Sense of Humor 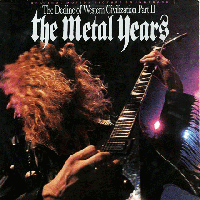 Opening this week: Captain America: The Winter Soldier. If you think the superhero genre is exhausting, check out these music documentaries instead:

Mistaken For Strangers
The National is a melancholy indie rock quintet, so why is the documentary about the band so funny? Mistaken for Strangers, made by Tom Beringer, the younger, goofier brother of frontman Matt, follows the director as he joins The National to film their 2012 tour. Along the way he messes up in amateurish, cringe-worthy ways. Through honest self-reflection, he pulls everything together, creating a scrappy, affecting testament to the power of failing upwards. It’s an interesting look at how self-esteem, showbiz, and family can sometimes overlap.
When: Opens April 4, various showtimes
Where: Arena Cinema: 1625 North Las Palmas, Hollywood

The Decline of Western Civilization Part II: The Metal Years
Going from punk to metal and back to punk over the course of two decades, director Penelope Spheeris (Suburbia, Wayne’s World) made the three-part Decline of Western Civilization rock documentary series. The films have been unavailable on video due to rights issues, but this month the Academy of Motion Picture Arts and Sciences will screen new 35mm prints of the cult favorites. First to show is Part II, which covers the 1980s hair metal scene in all its glory. It’s full of ludicrous moments that you’re likely find yourself quoting you after the screening.
When: Friday, April 4, 7:30pm (Parts I and III will screen Friday, April 18.)
Where: Bing Theater at LACMA: 5905 Wilshire Blvd, Mid-City (Spheeris will be on-hand to discuss the film.)