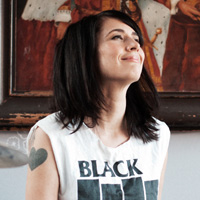 At the multiplex this Thanksgiving weekend is Homefront, a new Jason Statham movie in which he battles James Franco, and Frozen, a family friendly animated Disney feature. Here are some other options.

The Punk Singer
As the frontwoman for Bikini Kill, Le Tigre, and The Julie Ruin, Kathleen Hanna is a force of nature. Outspoken, controversial, and charismatic, she has been a focal point for third wave feminism and indie rock for two decades. It’s about time she had her own documentary. Upbeat, impassioned, informative, and dynamic, The Punk Singer compiles interviews and archival footage to chronicle Hanna’s turbulent life and the underground music scene that she symbolized. Also revealed are the personal and moving reasons why Hanna took a break from recording and performing from 2005 to 2010. Even if Hanna’s music isn’t your cup of tea, this is a message-making doc that’s unmissable. (Also available on VOD.)
WHEN: Nov. 29-Dec. 5, various times
WHERE: Cinefamily

Casablanca
Those who are in the know may sigh and wonder, “Who hasn’t already seen Casablanca?” We’re willing to bet that’s a lot of people. The 1942 drama is often called one of the best movies of all time, but what tends to go unexplained is that it’s great because it’s exceptionally entertaining. If you haven’t seen it or haven’t seen it with an audience, there’s no better way to become a fan of the flick. The perfect example of what the Hollywood studio system could do during its most productive and culturally relevant period, Casablanca stars Humphrey Bogart as world weary nightclub owner Rick who’s used to dealing with smugglers, corrupt officials, and Nazi sympathizers in World War II. Then, his old flame Ilsa (Ingrid Bergman) shows up. Casablanca will be screened alongside The Maltese Falcon, another Bogart classic that’s not too shabby.
WHEN: Nov. 29+30, various times
WHERE: The New Beverly Cinema