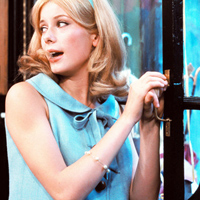 Opening This Week: Aaron Paul in Need for Speed. Instead of watching Jeese Pinkman in a Fast and Furious knockoff, how about checking out these picks?

The Umbrellas of Cherbourg
Fifty years old and featuring an impressive Michel Legrand score, Jacques Demy’s The Umbrellas of Cherbourg sounds too conceptual on paper (a “pop opera” with entirely sung dialogue) yet it’s a triumph of execution. The story: a relationship between a young man (Marc Michel) and woman (Catherine Deneuve) in a seaside town is ruined by circumstance and infidelity. While the film’s visual style is colorful and hyper-real, its buoyancy is tethered to a sense of everyday tragedy. The result is a masterwork, a slipstream of sound and image, tailor-made for heartbroken romantics.
When: March 14-20, various times
Where: NuArt Theatre, 11272 Santa Monica Blvd., West L.A.

Cheap Thrills
Some movies are a good kind of evil; Cheap Thrills is one. Pat Healy stars as Craig, a desperate family man who, after running into old friend Vince (Ethan Embry), parites with a rich couple (Dave Koechner, Sara Paxton) who like to wager Craig and Vince into doing risky things. As the night proceeds, it turns into a lucrative marathon of self-inflicted depravity. A recession-era black comedy, this well-acted, well-shot indie film is a crowd-pleaser for the strong stomached. If you go, prepare to be grossed out by gore and capitalism. (Also available through VOD services.)
When: Opening night party, Wednesday, March 19, 8 p.m.; runs March 21-27,various times
Where: Cinefamily, 611 N. Fairfax, Mid-City