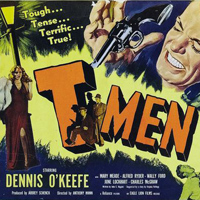 Opening This Week: Mr. Peabody and Sherman and The Grand Budapest Hotel. Both look good. But if you need something more, check out these picks.

Particle Fever
If you’re interested in the Large Hadron Collider but have no real clue what it does, have no fear because this well-made documentary lucidly explains its scientific purpose and complex physics. Sounds dry, we know, but Particle Fever also focuses on the people behind the experimental machine. The result is a film that smashes together the human and the scientific in an engaging and momentous way. (And it’ll make you sound smarter during cocktail party chatter.)
When: March 7-13, various showtimes. (Producer/physicist David Kaplan will be on hand for some Friday, Saturday, and Sunday screenings while Walter Murch, who edited Apocalypse Now and The Godfather trilogy, will join him on Saturday and Sunday.)
Where: Nuart Theatre, 11272 Santa Monica Blvd., West L.A.

T-Men/Raw Deal
This hardboiled double-bill will screen as a part of a series of films directed by Anthony Mann. T-Men is a prototypical undercover agent yarn. Raw Deal is about lovers on the lam. Both entertaining but what makes them extra special is cinematographer John Alton, the man most responsible for creating the film noir look (i.e. stark black and white photography that blends realism with expressionism.) Crime has rarely looked this compelling or fatalistic.
When: Wednesday, March 12, 7:30pm (Max Alvarez, author of The Crime Films of Anthony Mann, will be on hand.)
Where: Billy Wilder Theater at the Hammer Museum, 10899 Wilshire Blvd., Westwood.