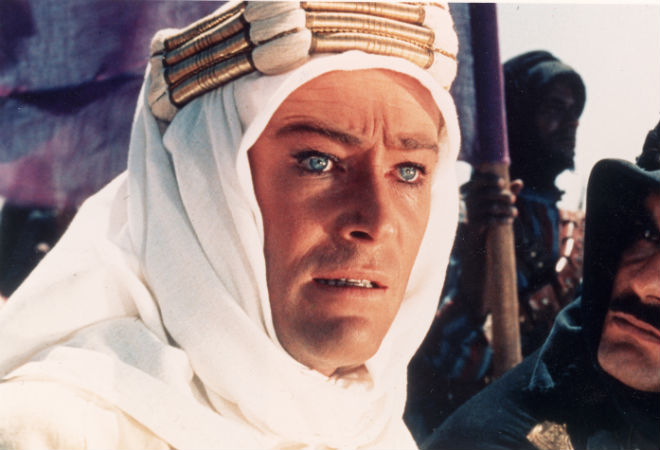 Opening these next two weeks: Anchorman 2, Her, The Wolf of Wall Street, Grudge Match and The Secret Life of Walter Mitty. If you need an alternative to the logjam of prestige dramas and holiday films, check out these recommendations.

Lawrence Of Arabia
Starring Peter O’Toole in his debut lead performance, Lawrence of Arabia, David Lean’s masterpiece about T.E. Lawrence and the British Army’s involvement in the Middle East during WWI, fully embodies the term “epic.” In it, sweeping desert vistas serve as backdrops to perilous journeys and large-scale revolt. At the center of it all is O’Toole’s haunted, multifaceted, and iconic portrayal as the title character. Seeing Lawrence projected on the big screen in 70mm is always a special occasion. Seeing it now is an excellent way to commemorate the star who passed away this past weekend.
When: Saturday, Dec. 21, 7:30 p.m. and Sunday, Dec. 29, 7:30 p.m.
Where: Aero Theatre, 1328 Montana Ave, Santa Monica (Dec 21); Egyptian Theatre, 6712 Hollywood Blvd., Hollywood (Dec. 29).

Ms. 45
Recently restored and ironically no worse than any episode of Breaking Bad or Sons of Anarchy, Abel Ferrara’s Ms. 45 is a trashy movie that contains multitudes. After being raped twice in one day, the speechless Thana (an excellent Zöe Lund) becomes a gun-toting femme fatale who wreaks vengeance on almost any man she encounters in early ’80s New York. The film is neither reactionary nor mere revenge fantasy; while it’s easy to understand Thana’s trauma-induced motivations, there’s also something disturbing about her cracked, non-discriminant murder spree. As a result, Ms. 45 is a sleazy exploitation film that manages to be feminist by showing the effects of sexual violence while having its protagonist be an individualized anti-heroine.
When: Dec. 20-22, various times
Where: Cinefamily, 611 N. Fairfax Ave., mid-city.