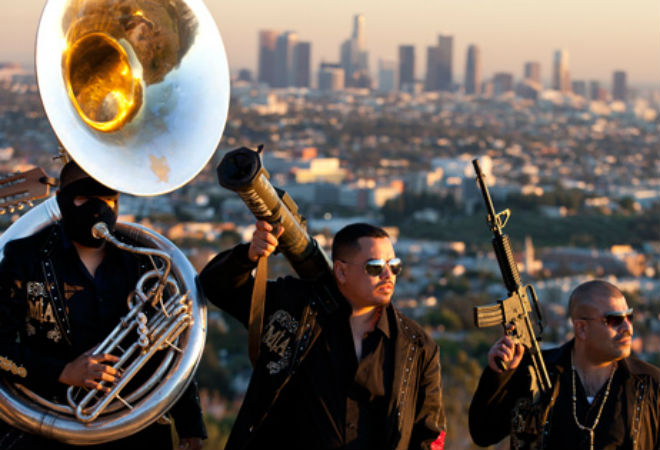 Inside Llewyn Davis, the new Coen Brothers film, opens this week. We won’t blame you for checking it out, but here are some other options.

Narco Cultura
A music documentary as well as an expose of the Mexican drug war, this work of non-fiction weaves together the stories of a Juarez-based CSI investigator and a U.S.-based singer/songwriter who fronts BuKans de Culican, a band that plays traditional sounding ballads glorifying narco-traffickers. Directed by photojournalist Shaul Schwarz, this film is all about overlaps: Along with the issue of cultural crossover, the fantasy of being a criminal not only contrasts but reciprocates a grim and heartbreaking reality. Fittingly, Schwarz implements a controlled yet arresting visual style while documenting social chaos and its influence on popular art. Not for the faint-of-heart, Narco Cultura is another great documentary released in a year full of them.
WHEN: opens Friday, Dec. 6, various times
WHERE: Laemmle Theaters

Unforgiven (Yurusarezaru Mono)
While we haven’t seen this film, it’s too intriguing to ignore: As part of LA EigaFest, the Japan Film Society will host the U.S. premiere of Lee Sang-il’s samurai remake of Clint Eastwood’s film Unforgiven. Starring Ken Watanabe, who also starred in Letters from Iwo Jima, this Japanese reimagining of Eastwood’s final Western creates a nice symmetry to film history: A Fistful of Dollars, the Sergio Leone shoot-em-up that made Eastwood an international star, is a secret remake of Akira Kurosawa’s samurai actioner Yojimbo. Sometimes, what goes around does come around. (The screening includes a Q&A with director Sang-Il.)
WHEN: Friday, Dec. 6, 7:00 pm
WHERE: Egyptian Theater