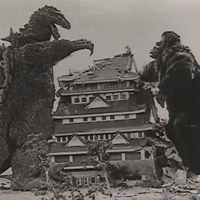 Godzilla (1954)
The big bang of kaiju films, the original Godzilla (Gojira), has returned to theaters in a restored 60th anniversary edition, just in time to coincide with the new Hollywood remake, which comes out May 16. At face value, it’s easy to dismiss a monster movie about a ginormous reptile breathing fire and wreaking havoc. But as it hasbeen pointed out, Godzilla is a deliberate metaphor for the nuclear warfare that devastated Japan in 1945. Hence, this is a seismic pop movie that crystallized a culture’s unfathomable trauma. Popcorn entertainment has rarely been as profound.
When: May 12-14, showtimes vary
Where: various Arclight Cinemas locations

King Kong vs. Godzilla/Mothra
This is one of the lighter double-bills you’ll ever see when it comes to movies about huge monsters that destroy things. After Godzilla became a smash, studio Toho Co. Ltd. started cranking out preposterous kaiju films that varied in quality but were usually entertaining. A product of that trend, King Kong vs. Godzilla is about a legal suit between JUST KIDDING. It’s about King Kong and Godzilla combating each other. The second half of this double-feature, Mothra, is a delightfully weird mixture of genres that involves tiny telepathic twins and a giant, prehistoric moth. Ridiculous? Yes. But don’t let that spoil the fun.
WHEN: May 11-12, showtimes vary
WHERE: New Beverly’s Cinema, 7165 Beverly Blvd., Mid-City