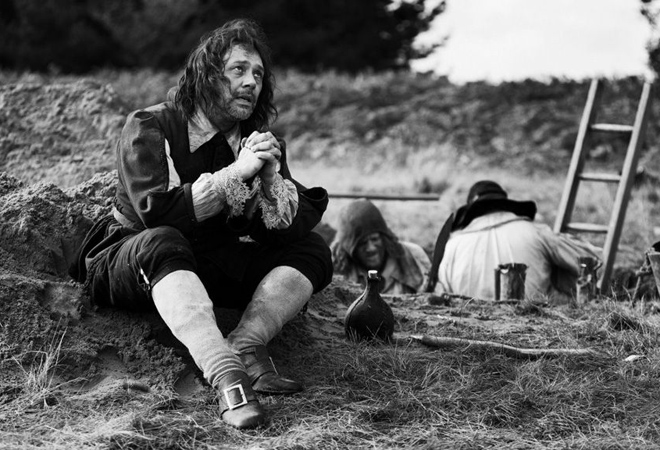 A Field in England

Opening This Week: The Lego Movie and Monuments Men. If you need something more unconventional or romantic, check out these picks.

A Field in England
Set during the English Civil War in the 17th century, Ben Wheatley’s A Field in England follows a group of AWOL men who are forced by an alchemist to look for unexplained treasure in, well, a field. At first everything’s a dark and grimy slog. Then things become increasingly strange, comic, and hallucinatory, evoking horror movies, Samuel Beckett, art cinema, and westerns. A weird and mysterious beast, A Field in England is must-see cinema for adventurous moviegoers with acquired tastes.
When: Friday, February 7-Thursday, February 14, various times.
Where: Cinefamily (611 N. Fairfax Ave., Mid-City) and Downtown Independent (251 S. Main St., downtown)

Before Sunrise/Before Sunset (double feature)
Close to Valentine’s Day, Arclight Hollywood will show a double feature of Before Sunrise and Before Sunset, two-thirds of a trilogy of dialogue driven films made by Richard Linklater, Ethan Hawke, and Julie Delpy. If Linklater only made Sunrise—in which young Jesse (Hawke) and Celine (Delpy) cross paths and spend one night together in Vienna—it would have stood as the quintessential Gen X romance film. The bittersweet, nine-years-later follow-up BeforeSunset accomplished the trick of being just as good as well as deepening its predecessor. Now, there’s a third film, the more grown-up Before Midnight, which focuses on the skirmishes and intimacies of a long-married couple. Let’s hope there’s another sequel.
When: Sunday, February 9, 5:30 p.m.
Where: Arclight Hollywood, 6360 Sunset Blvd., Hollywood.