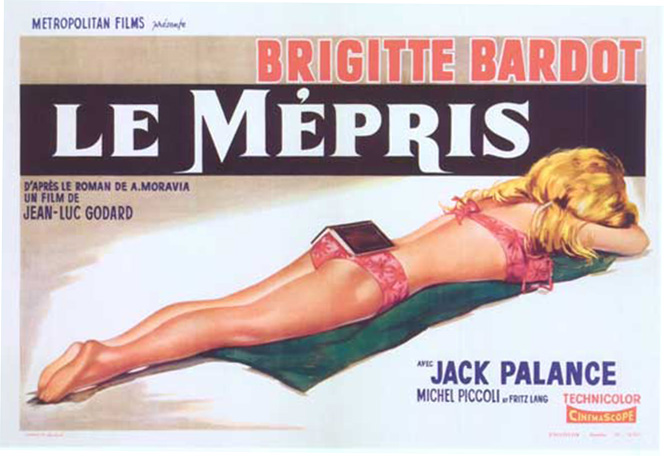 Opening this week: Jack Ryan: Shadow Recruit, The Nut Job, and Ride Along. Yet we recommend these two self-reflexive films made by French New Wave compatriots.

Contempt (Le Mepris)
Restored and rereleased for its 50th anniversary, Jean Luc Godard’s Contempt is one of the French director’s signature efforts. Based on an Alberto Moravia novel, it tells the story of a marriage between a writer (Michel Piccoli) and his wife (an iconic Brigitte Bardot) that crumbles as he is hired to doctor a film adaptation of The Odyssey. Widescreen cinematography, primary colors, and the stunning Villa Malaparte on the Capri coast were some of the “tools” Godard used to make a vivid, paradoxical, and layered film: It’s simultaneously all surface and all depth, fascinating and moving at some points, frustrating and trying at others. It’s essential viewing for anyone who wants to understand how Godard, in his ’60s heyday, created films that defied expectations while creating new ones.
When: Opens Friday, Dec. 17, various times.
Where: The Royal, 11523 Santa Monica Blvd., West L.A. Playhouse 7, 673 East Colorado Blvd., Pasadena.

Day For Night (La Nuit Americaine)
Winner of the 1974 Academy Award for Best Foreign Language Film, Day for Night (La Nuit americaine) is Francois Truffaut’s comical movie about movies. Truffaut plays a version of himself who oversees a fictional film production that, depending on how much filmmaking experience you’ve had, is either a living nightmare or par for the course. Actors with foibles ruin scenes and shooting schedules, lines are flubbed, and too many flings happen among the cast and crew. Nevertheless, Truffaut’s love for the process of making movies shines through. An influential crowd-pleaser, Night will be shown with Oliver Assayas’s Irma Vep, another French film that bears more than a passing resemblance to both of this week’s picks.
When: Friday, Dec. 17 – Saturday, Dec. 18, various times
Where: New Beverly Cinema, 7165 Beverly Blvd., Mid-City.