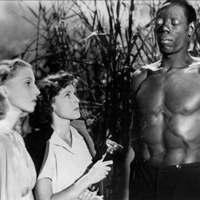 Opening: Muppets Most Wanted, Divergent, and a “quaint” foreign film called Nymphomaniac: Volume 1. But if you need more, look at these picks.

Jodorowsky’s Dune
In 1975 surrealist filmmaker Alejandro Jodorowsky (El Topo, The Holy Mountain) worked to adapt Frank Herbert’s classic sci-fi book Dune into a psychedelic epic. Despite massive ambition and an impressive creative team, the project fell apart and entered the annals of never made movies. Thankfully, there’s a detailed and entertaining documentary that explores what might’ve been. Featuring Jodorowsky and a wealth of archival material, Jodorowsky’s Dune is a triumph of speculative filmmaking that wonders whether crazy but praiseworthy pretension is crucial to the creation of groundbreaking art.
When: opens March 21, various showtimes
Where: The Landmark, 10850 W. Pico Blvd., West L.A.

Cat People/I Walked With a Zombie
In the 1940s producer Val Lewton made a series of seemingly ridiculous low-budget horror films at RKO Studios that, with black and white depictions of almost imperceptible terrors, can still hold sway over audiences. The first two of these films, both directed by Jacques Tourneur, comprise this double feature. Cat People stars Simone Simon as a Serbian-born woman who fears that her bloodline curses her to become a lethal cat person. I Walked With a Zombie is a voodoo retelling of Jane Eyre. Both are dark, elegant, and likely to linger in your mind like a sleepwalker.
When: March 20-22, various showtimes
Where: New Beverly Cinema, 7165 Beverly Blvd., Mid-City