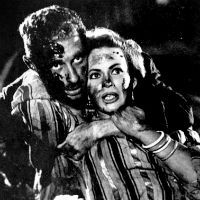 Opening This Week: How to Train Your Dragon 2 and 22 Jump Street. If you want something other than a sequel, check out these picks.

Willow Creek
For the most part, the found footage genre (The Blair Witch Project, Paranormal Activity) is lost. So why recommend Willow Creek, a found footage horror movie centered around Bigfoot? It’s well made by Bobcat Goldthwait, the comedian and actor who has managed to become a unique independent filmmaker. The story: An urbanite couple goes to Willow Creek, California to make an ersatz documentary about Bigfoot and the Patterson-Gimlin Film. But things get strange when they camp in the woods. The result is minimal yet suspenseful and effective; Goldthwait manages to transform clichés through smart directorial choices and solid craftsmanship.
Where: Currently available on VOD platforms including iTunes, Vudu, and Amazon.
(Los Angeles theatrical release pending.)

The Night of Counting the Years/Cairo Station
The Academy of Motion Picture Arts and Sciences will screen these films, which rank #1 and #2 on the Dubai International Film Festival’s list of the 100 greatest Arab films of all time. Shadi Abdel Salam’s Night is an atmospheric, eerie recounting of the Horabat tribe’s 1881 plundering of Pharaohs’ tombs in Thebes; it was recently restored by Martin Scorsese’s World Cinema Foundation. Cairo Station is Youssef Chahine’s suspenseful neorealist tale of obsession and crime based in a microcosmic railroad hub. Rarely screened in English-speaking countries, both movies are revelatory.
When: Friday, June 13, 7:30 p.m. and 9:20 p.m.
Where: The Bing Theater at LACMA, 5905 Wilshire Blvd., Miracle Mile