Home Film Counter Programming: A Children’s Film and a Film About a Childless World 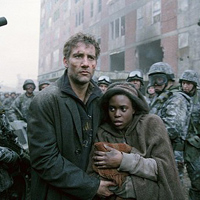 Opening this week: Liam Neeson does something action-packed on a plane in Non-Stop, but instead of watching a great actor cashing in, check out these picks.

Ernest And Celestine
Ernest is a bear. Celestine is a mouse. Both are creative misfits who become friends in a society that’s divided between their kinds. It sounds like a run-of-the-mill children’s film but its visual style (hand drawn animation that looks like a moving picture book) and wise, irreverent sense of humor make this Oscar-nominated French movie charming enough for all ages. It also has smart messages regarding discrimination and creativity. Don’t worry if you have a child who might enjoy the movie but can’t or won’t read subtitles: Ernest and Celestine is being released in both dubbed and subtitled versions.
When: Opens Friday, February 28, various times. (Director Benjamin Renner and producer Didier Brunner will be on hand for the 4 p.m. and 6:15 p.m. screenings on Saturday, March 1.)
Where: The Landmark, 10850 West Pico Blvd., West L.A.

Children Of Men
It might’ve prepared many for Gravity, but nothing prior in Oscar-nominated director Alfonso Cuaron’s prior career prepared audiences for Children of Men, the movie that crowned him a visionary filmmaker. Set in a dangerous future where human reproduction is impossible, Theo (Clive Owen) takes it upon himself to bring a pregnant woman to a sanctuary at sea. One of the best movies of the 2000s, Children of Men is a heady mixture of dystopian tale, religious allegory, and chase thriller with astounding production values. Even if you’ve seen it on video, it’s worth seeing in a theater.
When: Thursday, March 6, 7:30 p.m. (Director Wes Craven will be on hand to introduce and discuss the film.)
Where: ArcLight Hollywood, 6360 Sunset Blvd., Hollywood.