Home Art Why a Local Art Org Is Trying to Save a Nondescript Hollywood... 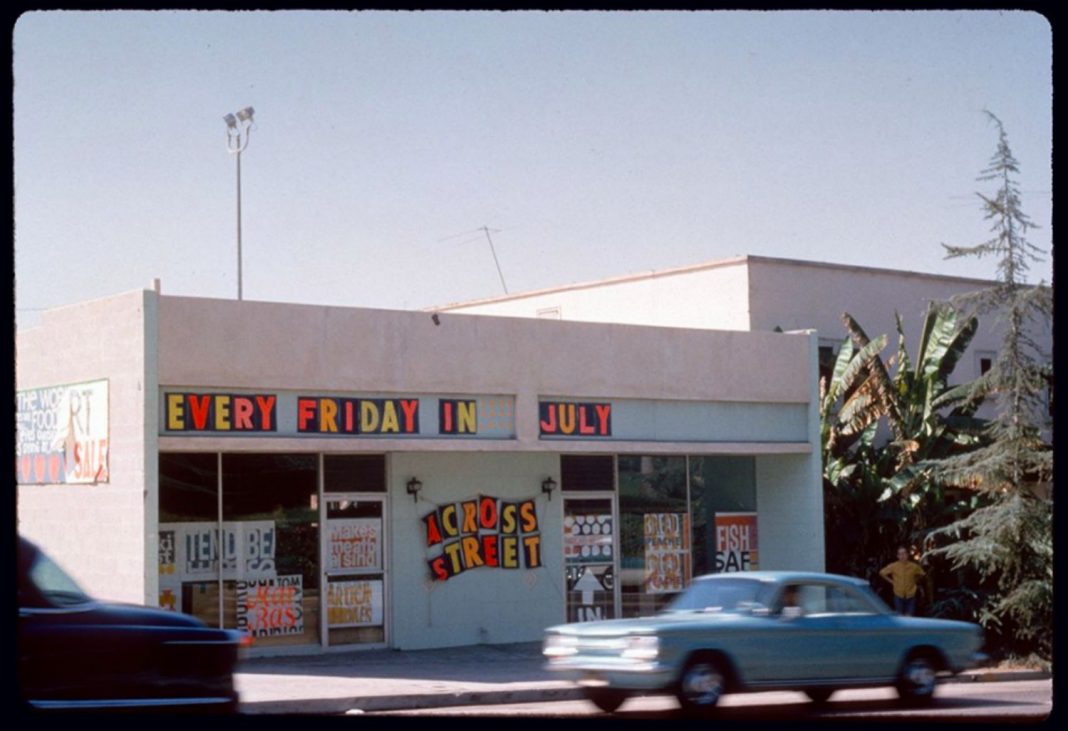 There’s nothing visually extraordinary about the building located at 5518 Franklin Avenue. Today, it’s a dry cleaner, but between 1960 and 1968, it was the studio of one of Los Angeles’ most celebrated artists. Corita Kent, then known as Sister Mary Corita, used the space to teach her students from Immaculate Heart College. It’s where she made some of her landmark works, like the 1965 piece My People, which addressed the Watts Uprising. At the studio she also hosted guests like Charles and Ray Eames and Alfred Hitchcock. Now, as the building faces possible demolition, a community is forming to try and save this unassuming piece of L.A. art history.

When the folks at Corita Art Center, the home of the late artist’s archive that’s located across the street from her old studio on the campus of Immaculate Heart High School, got word of the building’s potential fate, they flew into action. The goal: to have the building reviewed for possible designation as a Historic-Cultural Monument. “It really deserves to be reviewed by the people who have the knowledge to do that,” says Nellie Scott, director of Corita Art Center.

Their position is that the structure should qualify for Historic-Cultural Monument designation not only because it’s associated with a historic figure, but because it was a part of a significant period of Kent’s life and work. It is the sort of designation that has been given to spaces once inhabited by noteworthy men. “Many of the studios of her male peers do have the courtesy of being recognized,” Scott says.

Such a designation would further cement the legacy of a woman whose contributions to the art world, and Los Angeles, were immense, and whose work has experienced a resurgence in recent years.

Frances Elizabeth Kent grew up in Los Angeles and took the name Sister Mary Corita when she joined the Immaculate Heart of Mary religious order. She began teaching in the art department at Immaculate Heart College in 1947 and continued there as her art career soared. In 1966, she was named a Woman of the Year by the Los Angeles Times. The following year, she landed on the cover of Newsweek. Eventually, she would leave her religious order and begin using the name Corita Kent. She moved to Boston, where she died in 1986, one year after her iconic “Love” stamp was released by the U.S. Postal Service.

In her lifetime, Kent was a renowned artist. “The notoriety that she received in the ’60s certainly adds to the cultural significance in the Los Angeles area,” says Scott. But—”like many female artists,” Scott points out—Kent’s legacy had been obscured with time. “I think that this building, at least having it properly reviewed, could be L.A.’s opportunity to honor one of the more notable figures in the ’60s here.”

“She really taught us, in L.A., to take appreciation of our world around us.”

That the former studio is an ordinary L.A. building holding an ordinary neighborhood business is also important. Scott says that it’s reflective of the artist’s greater conceptual practice: “She really taught us, in L.A., to take appreciation of our world around us.”

Kent was, and still is, often associated with mid-20th century pop art. Her screen prints incorporated a wide variety of cultural references and her use of typography was innovative, ultimately influencing generations of graphic designers to come in her wake. Moreover, she used art to speak out about the social and political issues of the time. “Her work really addresses these issues about poverty and racism, war and injustice,” says Scott, adding that the messages within Kent’s work “contribute to the identity of Los Angeles.”

Ultimately, Scott says, Kent’s dedication to social justice issues would push her art in another direction that would also become crucially influential. “We now see this larger movement in art called social practice, and that’s really at the core of what she was doing,” Scott explains.

There has been a renewed interest in Kent’s body of work in recent years, as exhibitions from Los Angeles to London have reintroduced her to new generations. Last year, the City of Los Angeles has declared her birthday—November 20—to be Corita Kent Day.

The caretakers of Kent’s archives aren’t alone in the fight to save the artist’s former studio. They’ve been joined by concerned locals, as well as artists and art-lovers from across the world. The Corita Art Center is keeping its website updated with the best ways to help. Right now, they’re asking for those who are interested to contact representatives from Council District 13 to hold off on approval of the project until the building has been reviewed by the Office of Historic Resources and the Cultural Heritage Commission.

“Once it’s knocked over, we don’t get to go backwards,” says Scott. “There’s an opportunity and a lot of people see that, especially those who know who she is and want to celebrate her.”

RELATED: How a Los Feliz Nun Became the Anti-Warhol of Pop Art