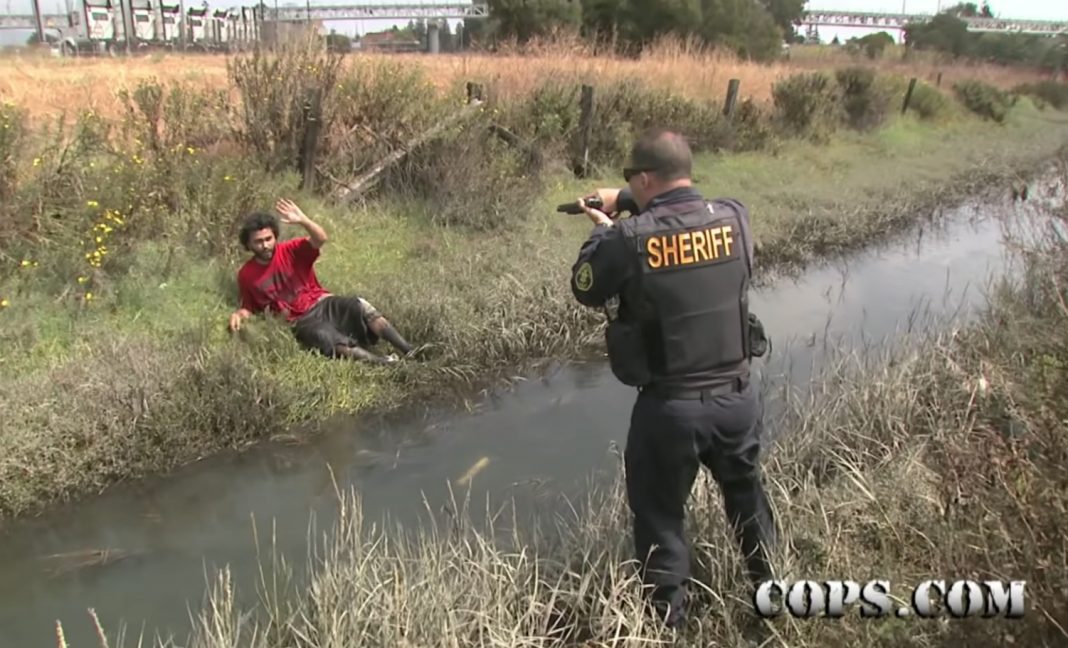 COPS began airing in 1989, and while you might not have thought about the television bad boys (bad boys) in a while, new episodes are still being churned out and running alongside marathon blocks of reruns. After decades of passively absorbing the show, journalist Dan Taberski decided to take a closer look. His new podcast, Running from COPS, goes deep inside the production—and reveals that the way the show distorts situations might make it more troubling than your average reality show.

“Headlong,” Taberski says, “is all about reassessing parts of the culture that I think people might be getting wrong.” So when he realized COPS was still airing–and the episodes were remarkably similar to what they looked like 30 years ago, even as patterns of crime and public perception of policing have changed–he thought it might be time to examine what was really going on behind the scenes. Taberski spoke with us about what he found.

Your initial experience of COPS was just as a fan who watched the show. What inspired you to dive into making the podcast?

I have been watching COPS for years! It’s on all the time, sometimes 15, 20 times a day. Part of me was captivated. Part of me started questioning: How are they doing this? How does this work? Why do the police let them do it, how much control do they have, how much say do the suspects have over being on the show?

COPS has been on for over 30 years and people don’t really even talk about it any more. It’s become the kind of thing you look at and think, “Is anybody else seeing this?” I wanted to know what it was that I had been watching this whole time.

How would you characterize the image of policing the show depicts?

When you watch COPS, you see things on it all the time that will make you wonder if police can really do that. You see things like aggressive use of Tasers, incredibly aggressive use of police dogs. Things like pretext stops–25 percent of all COPS interactions are traffic stops, and a huge portion of them are pretext stops, the practice of stopping people on a technicality, just so they can investigate someone they suspect may be involved in some other crime. This is all framed as “good policing.” Every segment ends with, “We got another bad guy. Another bad guy is behind bars.”

But you really wonder just how legal, ethical, constitutional all the behavior you see in the show really is. We found that a lot of it is not constitutional, not legal, not ethical, not good policing.

What was the world like when COPS was created?

When COPS started in 1989, it was the height of the ‘War on Drugs,’ crime was quite high, and the public’s image of the police and their ability to fight crime was at an all-time low. COPS took advantage of that time in our culture. They showed policing as things like putting people in headlocks, busting down doors with battering rams.

There were a huge amount of drug busts, 36 percent of all COPS segments are drug crime, which is over three times the rate in real life. There was a real appetite for that in a certain part of the culture. Fear was high and they wanted to think that the police were “doing something.”

Obviously, a lot has changed, especially in the last few years. With YouTube and iPhones, everyone has their own camera, their own broadcast network. COPS is no longer the dominant depiction of how policing works in America. For 25 years, it really was. I don’t think you can overstate how powerful that was in terms of how Americans see policing and what they think is “good” versus “bad” policing.

How does COPS differ from traditional news coverage of police?

On the news, you don’t see real policing. You see the police after the fact, when they give a press conference and explain their behavior.

The big breakthrough that COPS made is that John Langley, the producer, convinced local police departments that participating in his show would be good for them–that it would give them a way to circumvent the news. He told them that the show would portray the cops the way they wanted to be portrayed, and that the police would have editorial control over the footage.

The police see rough cuts, they decide what does and does not go into the show. In terms of public relations, police departments got a lot out of being on that show.

In one of the interviews, it comes out that COPS filming crews were known to carry guns themselves. Did that shock you?

These producers were going into really dangerous situations along with the police, and they’re on their own. So I guess it didn’t really shock me that the producers in the early days carried guns. But I also think it’s an illustration of how close the producers and police were. This isn’t vérité documentary making where the filmmaker is just an outside observer, capturing things as they happen, and then can use anything they record to make the finished show. These guys were working together­–though the police were always in control.

If you meet someone who is a fan of the show and enjoys watching it for entertainment, what is the most critical thing you want them to understand about what they’re absorbing?

Everybody associated with the show insists that everyone you see signs releases, and that people are even happy to be on COPS because, they say, even criminals want to be on a reality show. Now, it’s incredibly hard to find the suspects who have been on COPS. We went to great lengths and we only ended up finding nine. But of those nine, all but one said they either did not sign a release or consent, they were too drunk or high to know if they were consenting, or they were coerced into signing the release.

As a viewer of the show, I think it’s important to take a step back and really ask yourself how willing you think the people who are on the show were? How much does coercion play a part in the producers getting the footage that you see? When you think of it that way, it becomes less palatable.

You don’t really think of that when you’re watching the show, but when you really dig in and find those people, every story is upsetting. Every story is someone who feels like they were exploited, and these are people who don’t have a lot of power and they can’t do anything to fight back.

When you start to add it up–over 1,000 episodes, three segments an episode, thousands of police interactions, and not just the suspects that are arrested on camera, but also their families, also people in their communities who don’t like how they’re being portrayed–it’s a huge ripple effect of people who are being put on a show regardless of if they like it or not.

RELATED: Court TV Is Back to Feed Our Hunger for 24-Hour True Crime and ’90s Nostalgia

“And That’s Why We Drink” Hosts Hit the Road, Again