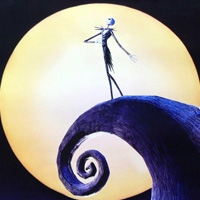 It’s been nearly 20 years since Danny Elfman’s last live vocal performance (that would be with his long disbanded New Wave group Oingo Boingo), but the pop-musician-turned-film-composer is returning to on stage. And he’ll be performing scores from the films of his longtime collaborator, Tim Burton.

Just in time for Halloween, Elfman is bringing the act to Club Nokia for three nights, October 29-31.  When he performed the show earlier this month at the Royal Albert Hall and a few other venues in the U.K., it reportedly included a few tunes from seasonal favorite The Nightmare Before Christmas, one of which was sung by his wife, Helena Bonham Carter.

We’re giving away a pair of tickets to the show on Wednesday, October 30. Want to win? Enter here before Tuesday, October 29 at midnight.