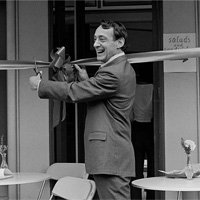 After serving almost eleven months as a San Francisco supervisor, Harvey Milk was assassinated in 1978 along with the city’s mayor George Moscone. He didn’t hold the highest profile government job, but as the first openly gay person to be elected to public office he made national headlines. Milk couldn’t have known that his life would be honored with an Academy Award-winning documentary, The Times of Harvey Milk. Or that Sean Penn would win his second Oscar for portraying him in Gus Van Sant’s Milk. Nor could he have imagined that a one-hour oratorio, a large musical work for voices and orchestra, would be written about him and performed around the country.

Broadway composer Andrew Lippa (The Wild Party, Big Fish, The Addams Family) has written I Am Harvey Milk and will sing the main role in two performances with the Gay Men’s Chorus of Los Angeles this weekend at Walt Disney Concert Hall.

“I think there’s a thing in our culture and it may be in other cultures around the world, but there’s something about the ‘first’ idea,” Lippa says. “It’s the notion of the first person to do something. Also, charismatic leaders like Harvey Milk don’t come around all that often. Like other great leaders, he had one simple message and he stuck to the script. And it was come out, come out.”

I Am Harvey Milk was commissioned by the San Francisco Gay Men’s Chorus, but once Lippa got started, he knew more about what he didn’t want to do than what he did. “I didn’t want it to be a traditional narrative story. I didn’t want there to be dialogue. I didn’t want a fill-in-the-blanks piece. And it didn’t have to be chronological.”

It was a letter from his grade school teacher that most inspired Lippa. “It was a few years before I started working on IAHM. She wrote me this two-page letter and said, ‘I always knew you would be successful because even at 6-years-old you were…’ and then she listed a whole list of adjectives. And when I read it I recognized myself in those adjectives. I recognized that I am still those things. That’s how we are as human beings. So I wanted [a young] Harvey Milk to look at [adult] Harvey and for Harvey to be able to look at the child. When I realized that, the whole thing cascaded. I thought 11 movements would represent each month he was in office. The prologue is when he is a child and sings about the operas that he loved and how he wanted to live his life on an operatic scale.”

Lippa admits that his composition isn’t easily categorized. “It’s not classical choral music. There’s a disco number in it. There’s a drum set. There’s electric bass. But it’s not a Broadway musical. That’s the thing I love about IAHM. It really begs the question: What is it?”

Whatever you want to call it, Lippa was adamant his composition would come full circle. “I knew that the piece started in D Major and when I wrote [the last movement] ‘Tired of the Silence,” I wanted it to end in D Major. I wanted to illustrate musically that we end as we begin. It starts very gently and it ends very heroically with the choir singing ‘come out’ at full volume. What I’m trying to say is we don’t need all that stuff. We don’t need to ride a bus. We don’t need to be on a track. We just need each other to hold onto in the dark. And when we sing together, that can be an evocation of that idea.”

It’s a goal he has already achieved. After a performance in San Francisco, Lippa was told that one creative team member’s 21-year-old cousin was so moved by I Am Harvey Milk that she reached out to her parents and made that call. “I couldn’t stop crying when I heard that because that is what Harvey did for me. If I can help further what Harvey did for me and have a young woman step outside after a concert to call her parents and express her true self, then we’ve done something good for the world.”