Home TV “Community” 101: Class is Now in Session at PaleyFest 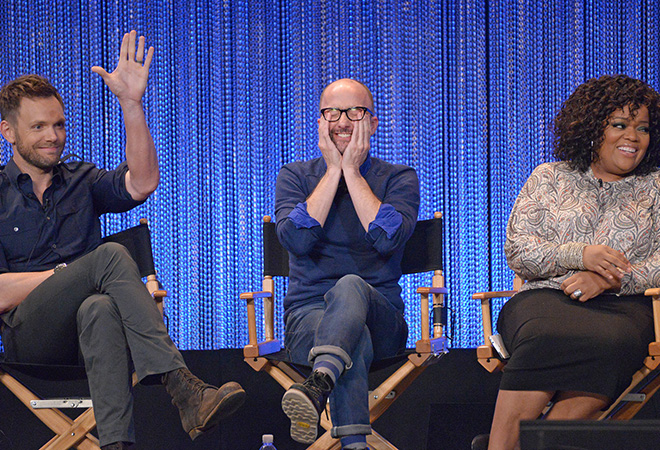 Last night the cast and crew of collegiate comedy Community turned out for their fifth consecutive (and they claim “fan demanded”) PaleyFest panel, which turned out to be the Dan Harmon Comedy Hour. From impressions to lengthy speeches about cast members no longer on the show, the creator proved yet again that his crazy brain is truly the source of the show’s the wacky material.

Amid a disturbing amount of butt patting and even some kissing (Shirley and Abed, anyone?) we learned at the panel to never underestimate the power of the show’s star, Joel McHale. According to Harmon, when he was fired as showrunner prior to season four, it was McHale who orchestrated efforts to save the show. McHale claims, “It just wasn’t the same show!” The continuation of the series without their eccentric creator was impossible, as evidenced by Harmon’s eventual rehiring. One small victory for McHale, one huge win for Community fans.

One of the night’s main themes was the mysterious departure of Donald Glover (Troy Barnes) whose character was half of the best millennial duo to grace the small screen in years. Fans expected his onscreen BFF Abed to stagnate but Pudi, who plays Abed with deadpan perfection, sees it differently. “Abed is using what he learned from being friends with Troy to connect and reach out to others,” he said. Harmon added, “Sometimes people go away that you really don’t want to go away.”

Brown discussed her need to protect her character, especially online in her own PSA moment after admitting she habitually gets into Twitter arguments. Just this week she got into a 48-hour online fight with a fan that led to her eventually blocking him. “I know I should stop responding, but I feel like it was a teachable moment,” Brown laughs. “You people need to be nice!” she said to roaring applause.

The audience also got a special sneak peek at part one of the season five finale, which will air on April 10. Fans of the Jeff and Britta relationship can rejoice. The episode features a huge moment between them—more than a kiss but less extreme than her being pregnant with his baby. It’s as if nothing else exists in their little world as the rest of the school freaks out about their beloved Greendale being taken over by the sandwich giant Subway. (Would that really be so terrible?)

As for the future of the show, the cast and crew goodheartedly treat each day as if it’s their last. Exhibit A: A man walks on stage during the panel and hands an envelope to the moderator. McHale immediately exclaims, “We’re cancelled?!” The audience breaks out in a fit of laughter. “The only thing weirder than actually getting a sixth season would be not getting a sixth season,” says Harmon. “After all this they owe us a movie, right?” We sure hope so.