Home Uncategorized Comedy Duo Tim and Eric Break Out of the Box. You Have... 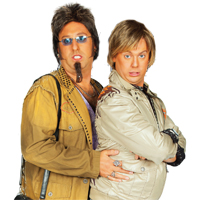 Eric Wareheim keeps a notebook by the side of his bed to jot down jokes that come to him in the night. “But only about 50 percent are legible in the morning,” says Wareheim. “They come from nightmares and from living in Los Angeles.” That could explain the tangled and queasy surrealism behind Tim and Eric, his partnership with Tim Heidecker. The L.A. pair’s first film, Tim and Eric’s Billion Dollar Movie, opens March 2 at the Nuart. Regulars on their cultish Adult Swim series, Tim and Eric’s Awesome Show, Great Job!—including Will Ferrell, John C. Reilly, and Zach Galifianakis—show up in the film, which Wareheim describes as “a movie within a movie making fun of moviemaking. We’re exposed to a lot of douche bags and ridiculous people in Hollywood. It’s a good sign if you’re offending people. To do anything else would be pretty boring.”