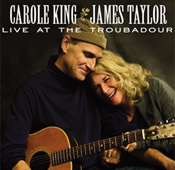 James Taylor and I go back—way back. I learned songs like “You’ve Got a Friend” and “Sweet Baby James” around a fire at summer camp in the eighties, memorized the albums James Taylor, Sweet Baby James, and Walking Man (and proudly defended the simple romance of “Something in the Way She Moves” to my first boyfriend, who preferred the musical stylings of 311) in the nineties, and finally met the man himself in the aughts. When Taylor dropped by UCLA to pick up his Ira and George Gershwin Award at Spring Sing 2004, an event I participated in as a student at the school, I cried kismit before sneaking into his makeshift green room backstage to snag an autograph. Since then, I’ve caught half a dozen local shows (and heard the same concert patter as many times. Haven’t heard the one about the horse-drawn guitar yet? If you plan to see Taylor perform in your lifetime, you will.)

Okay, so despite all that shared history, James Taylor and Carole King go back a little further. They played their first show together at the Troubadour over forty years ago, before King was a star. Tonight through Saturday they’re reuniting with their original backing band at the Hollywood Bowl to play many of the songs (now hits) they performed in November, 1970. To celebrate, Taylor and King are donating the proceeds of ticket sales for a limited number of “premium” seats on the stage to charity. According to show promoters, the intimate VIP Stage Seat packages are expected to bring in over $1 million over the tour.

I won’t be sitting on the stage myself this weekend when I catch the show. But I’ll be there, somewhere near the middle of the Bowl, basking in the warmth of something familiar that’s still true. Like a friend.