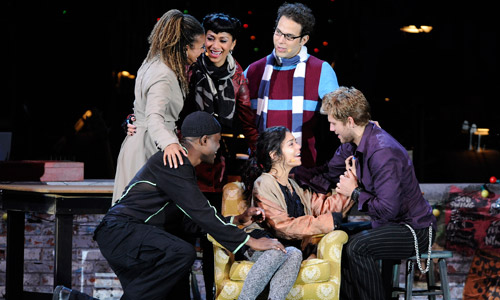 I’ll admit it—I’m kind of a Rent geek. No, I don’t listen to it in my car (lately) or sing it in the shower (anymore), but I was exposed to the music long before I ever saw the show, and many years before I saw the movie. I have distinct memories of my summer camp counselors playing the soundtrack on repeat, often singing us to sleep with Jonathan Larson’s inspiring lyrics. I’m almost convinced that “No Day But Today” was my camp’s unofficial anthem in the late 1990s.

Needless to say, I was excited to see Neil Patrick Harris’ direction of Rent at the Hollywood Bowl last Sunday night, along with his star-studded cast. And when scarf-clad Mark (Skylar Astin) took the stage for his opening monologue, I gasped along with all of the audience members who had seen the show countless times before and knew what to expect but were excited anyway. It was a series of highs and lows from there.

First, the highs: The Bowl’s acoustics were incredible, highlighting the vocal powerhouses of the evening—Nicole Scherzinger, whose captivating rendition of “Over the Moon” elicited cheers and inspired the audience to sing along with her; Wayne Brady, whose soulful alto infused emotion into his on-stage romance; and Aaron Tveit, who perfectly captured his character Roger’s angst with rock-star magnetism. Ensemble numbers “Seasons of Love” and “I’ll Cover You (Reprise)” were perfectly executed, with cast members standing in a single line across the stage—no choreography to detract from the singing itself. Tracie Thoms was both convincing and amusing as Maureen’s lover Joanne, particularly when dancing with Mark across the stage in “Tango Maureen” and taming Nicole Scherzinger’s prowess in “Take Me Or Leave Me.”

And now, the lows: Though the Bowl is undoubtedly an impressive venue, it’s large size detracted from the stage itself, and I found myself focused instead on the jumbotron screens located on either side. While helpful in magnifying the actors on stage, it made the show feel less personal—like watching a film of the performance rather than viewing it live. At times that “film” was better than the real thing; the actors had trouble navigating the large, multi-level set and did not consistently own the space.

Compared with her celebrity counterparts, Vanessa Hudgens seemed amateur in her depiction of Mimi, Rent’s HIV positive, drug addict romantic lead. She definitely had stage presence—particularly while strutting her stuff in spandex during “Out Tonight”—but her vocals were lackluster in comparison to the musical’s more experienced stars. I suspect Hudgens—who is reportedly trying to shake her High School Musical image—was cast for her loyal fans, and not necessarily because she was best suited to the part.

Vocal and stage glitches notwithstanding, Rent’s message about the power of love and living each day to the fullest radiated throughout the performance. Other Rent geeks left the show clutching their programs so tightly there weren’t any left to grab. Anyone have a program to spare? I’d like it for my collection.