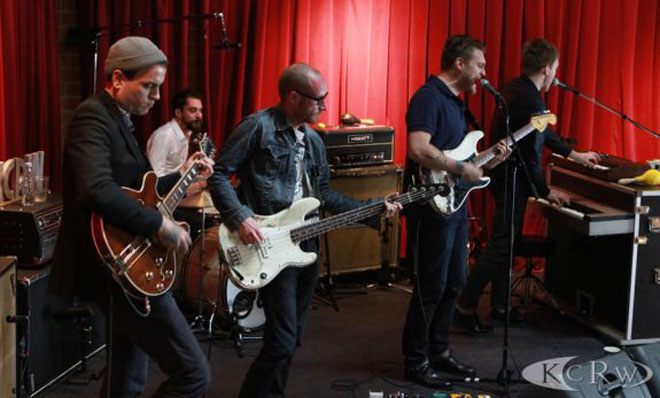 The Cold War Kids opened their set for KCRW’s Berkeley Street Sessions with the title track off their new album, Dear Miss Lonelyhearts. As they told Jason Bentley, it was inspired by lead singer Nathan Willett’s reading of Nathanael West’s 1933 book, Miss Lonelyhearts, about a newspaper advice columnist who is consumed and eventually undone by his role as a dispenser of wisdom. They followed that with another new one, “Miracle Mile,” a track whose setting required little explanation for the crowd.

On their fourth full-length effort, the Long Beach band proves they’re not kids anymore. The new album, recorded in their San Pedro practice space, doles out their trademark bluesy barroom rock songs but also reaches into new territory. On “Fear and Trembling” (have they also been reading Kierkegaard?), a slow-building track propelled by Willett’s falsetto, they sound startlingly reminiscent of Marquee Moon-era Television. Longtime fans were rewarded with “Rubidoux,” a whooping, rollicking number that closed out their set on an exultant note.

The band has had a few hits, but now they radiate a more philosophical sense of themselves, especially when they perform live. Dear Miss Lonelyhearts is due out on April 2; you can catch a taste of it later this morning when “Morning Becomes Eclectic” airs their full set.