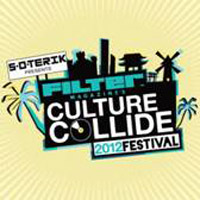 Coachella has its cruise ship, and now Culture Collide has its own airplane flight. It’s all part of the recent trend of event promoters turning their semi-alternative music fests into travelling parties.

S.S. Coachella
Stocked with an extra supply of lifeboats and sparkly American Apparel hot pants, the S.S. Coachella (yes, that’s the real name) departs on its maiden voyage this December. The five-day trip to the Bahamas (there’s also a cruise to Jamaica) features on-board casino gambling, a salon that specializes in asymmetrical haircuts, and performances by Pulp, Hot Chip, Yeasayer, Girl Talk, Sleigh Bells, and many others.
Cost: $1,700-$3,200 to book a room. That’s not out of line for a non-indie rock cruise, but aside from Jarvis Cocker don’t expect to mingle with loads of common people.
Target Audience: Coachella old-timers exhausted by Indio’s crushing heat and the throngs of younger, more attractive concertgoers. Also, trust fund hipsters.
What To Bring: Headband, bathing suit, ironic mustache, booze in mouthwash bottles.

Culture Collide
Backstage passes sound positively déclassé compared to this three-hour flight from New York to Los Angeles. You’ll be heading to the Culture Collide festival, happening in L.A. on October 6-9, while listening to DJ sets from School of Seven Bells and of Montreal’s Kevin Barnes (no word on whether they’ll allow dancing in the aisles) and an acoustic set from Penguin Prison. Appropriately enough, the flight (on Virgin) is titled I’m With The Band.
Cost: $139 (main cabin) – $2330 (first class)
Target Audience: New Yorkers who secretly love Los Angeles, music writers who have convinced their corporate overlords this is a “business trip,” federal air marshalls.
What To Bring: Neck pillow, eye pillow, iPad, headphones–so you can still act like you’re too cool to care about the music.