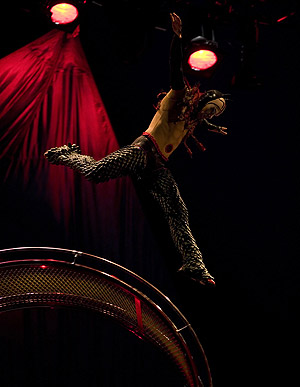 Cirque de Soleil’s Kooza, recently extended through December 20th at the Santa Monica Pier, was a triumphant feat of emotions—for me. Yes, I was awed: the unworldly talents of the Cirque performers never cease to amaze, from Las Vegas’ Love and Ka to Santa Monica’s more humble Kooza. I was amused: the three clown-like characters that entertained between sets elicited laughs with audience participation that was both witty and outlandish, including an oversized dog that—ehem—relieved himself on people in the first row (so much for those expensive seats). But mostly I was anxious, nervous and worried for the death-defying performers, especially those navigating the aptly named “Wheel of Death,” who with just one false move could break their neck (along with every other bone in their body), and those who acrobatically (and horrifyingly) contort their bodies in ways that most people can’t—and definitely shouldn’t—do. One petite contortionist, her torso resting on the stage with her elbows under her chin, walked in a circle around her own head. It was an emotional rollercoaster, let me tell you.

More than that, it was incredible entertainment. Unlike the permanent Cirque de Soleil shows, Kooza forgoes the grandeur flying and water effects of Mystere and O, and returns to its circus roots instead, focusing on the performances of the troupe rather than set spectacles. Traditional circus acts including a trapeze artist, tightrope-walkers (and bikers), unicyclists, and a juggler exhibited technical skills that put the Ringling Bros. to shame. In the “Wheel of Death” routine, two artists race inside—and on top—two human-sized hamster wheels connected by a metal shaft, propelling the 1,600-pound contraption to rotate at a dizzying pace. While one man runs, hamster-style, within his wheel, his partner runs on top of the other, leaping and soaring through the air before landing and barely catching the wheel to resume running as before. At that point I was barely breathing. Judging by the gasps from others sitting around me, I wasn’t the only one.