Home Film Classical Music and Surfer Films Come Together in a Screening of The... 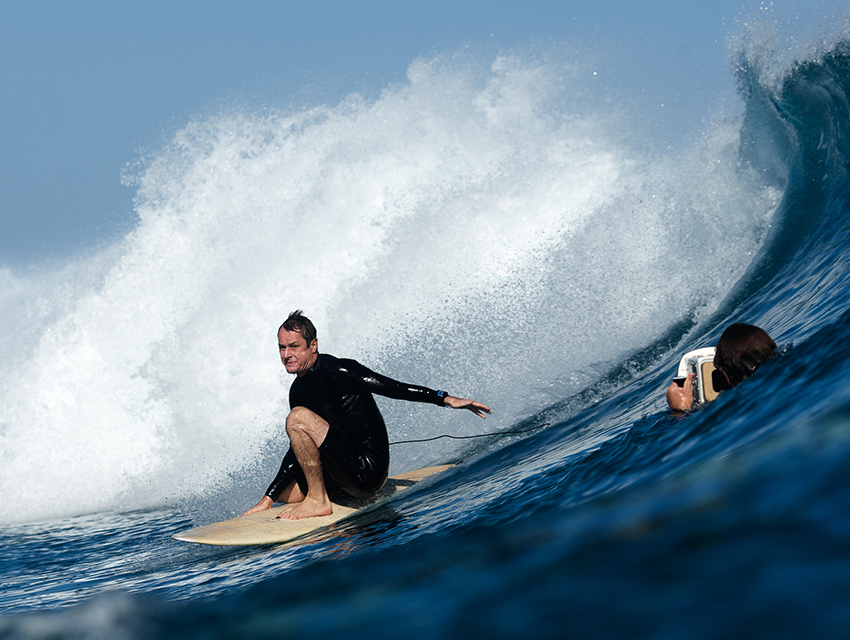 If you think about the programming at Walt Disney Concert Hall, a screening of a surf movie is probably the last thing you’d expect from the iconic venue—or maybe the music of Alice in Chains. But on Tuesday, February 16, you will indeed find hard rock and surfing on the agenda with a performance of The Reef, helmed by lead violinist and artistic director of the Australian Chamber Orchestra, Richard Tognetti.

“I don’t think you can get further away from ‘straightforward’ than The Reef,” Tognetti says from his home in Australia. “It’s about as post-modern as you can get. It’s going to be very interesting to see how people who like their ‘classical music’ respond. We’re all speeding down the 21st century highways of change, so if you can’t open your ears and mind to what is essentially an aesthetic film, you’ve got wax in your ears.”

Tognetti says the combination of the 75-minute film with live accompaniment offers music for everyone. “There are elements the classical crowd won’t like and there is work the surfer crowd won’t like,” he says. “It’s got an eclectic, motley group of surfers and very highly eclectic music ranging from Beethoven to Ligeti to original music to Alice in Chains to electro punk.” Much of the original music was written by Tognetti.

“I have always been interested in what people are doing on the other side of the fence,” he says. “Filmmakers, painters, cartoonists, pop musicians—to see what happens when you combine them and what chemical reaction can occur. The concert hall is this sacrosanct, holy space, and people come to us. We are in an enclosed, precious, controlled environment. You’ve got to pry open the mind of the audience members, and that is quite a hard task with something such as a surf film.”

The Reef was filmed in various parts of Australia. “There’s spectacular surfing,” Tognetti says. “We went to Northwest Australia, where the desert meets the sea. Imagine if Arizona poured into the Pacific. You get glimmers of it in Mexico. It’s extraordinary landscape. Let’s start with a motely group of surfers and musicians and throw them in the desert and make a surf film. We had six weeks to do it. A film like this can’t have a narrative –it would be too prescriptive. It’s more painterly. It is an imaginary day as an allegory. We start in the dark and we finish in the dark. It’s the aging process—the transfiguration and also the notion of wonder. And that is so easily lost in today’s world.”

The Guardian has called Tognetti “an anarchist with an orchestra.” How does he feel about such a description? “An anarchist is a complex term, isn’t it?” he muses. “An anarchist, in a simplistic way, is a nihilist with negative implications and the notion of not believing in anything. I believe in many things. The other implication is someone who is blowing things up. I don’t believe I do that either. We should be careful using that terminology these days. I think picking up rocks and looking under them is essential. Being dialectical is important, and not just turning up to do your job is important. It’s my lifeblood to mix the old and new like this. I’ve always done it, or as long as I’ve run the orchestra I’ve done it. This is so liberating as we’re making a film and it is driven by the music. The music drives the film the whole way. Therein lies the massive difference.”

What Is the Future of Coffee? This Aficionado Intends to Find Out