And just like that, summer 2022 is almost over. That means that Cinespia, the organization which brought numerous modern classics to its outdoor silver screens will be closing out its season with a bang.

Though the leaves may not turn to a crisp orange or yellow as California cues in autumn, the season’s traditions are already felt and the buzz of upcoming Halloween celebrations is in the air. As pumpkins and plastic ghouls begin to line the yards of our homes, Cinespia is rising to the occasion. For its October lineup, it will screen three different horror classics from legendary filmmakers: John Carpenter’s The Thing, Brain DePalma’s Carrie, and Francis Ford Coppola’s Bram Stoker’s Dracula. So set your best 70s prom outfits aside for DePalma’s high school revenge classic and dust off your best late-1800s costumes for Coppola’s late-career spectacle—and prepare for another incredible month of screenings around L.A.

For more information or to purchase tickets, visit www.cinespia.org.

If you enjoyed the original Halloween, you’ll love this classic. Though John Carpenter’s films may have fallen on hard times in recent decades, the contributions he made to film during the late 70s and 80s are undeniable. The Thing is perhaps his masterpiece, telling the tale of an Antarctic research outpost struck by madness and mayhem when a creature comes lurking. The Kurt Russell-led horror-thriller boasts some of the best special effects from its era to make this one feel both gross and chaotic—just as Carpenter intended. Don’t miss the chance to see it on a big screen, as time has cemented it as a stone (or ice) cold classic.

Before anyone asks, no, this isn’t the spotty 2013 remake of the cult classic. I respect Chloe Grace Moretz, whose talent is clear in the role of Carrie White, but even for one of the best young actors today, it’s tough to transcend a spotty script. The 1976 version is the one that will be projected on Cinespia’s outdoor screen. In this film, a tormented high schooler slowly discover her true powers of telekinesis. In the end, Carrie comes down to that prom scene climax, which will be sure to light up the faces of attendees—and the film’s final fright will certainly earn a chef’s kiss to Cinespia’s curators vis-a-vis the screening’s location. Carrie White may have been slighted by romance, and family, and friendship her whole life, so don’t let that happen to you and bring a date or family member or friend along and enjoy one of the best horror films of all time on the big screen. 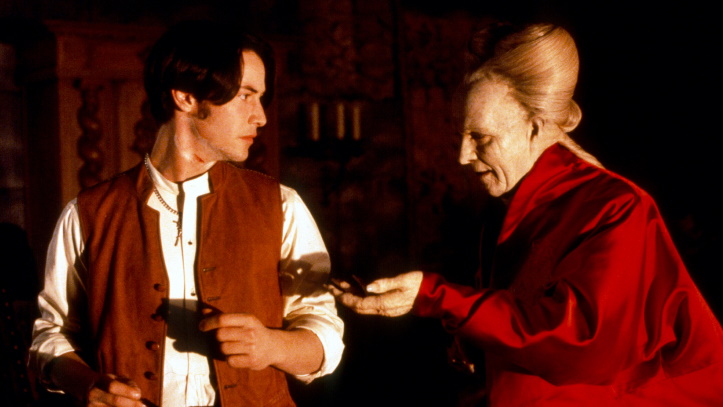 Before the era of Twilight films, there were vampire romance films that took themselves a bit more seriously, to say the least. Bram Stoker’s Dracula happens to be one of these Hollywood curiosities, wherein the Count (a memorably-wigged Gary Oldman) lusts for the enchanting Mina Harker (Winona Ryder). If those 90s film icons aren’t enough for you, Coppola did humanity the favor of also casting Anthony Hopkins just after his first career peak in Silence of the Lambs, Keanu Reeves, here stepping out of his early dude-bro persona, and Monica Bellucci, who was introduced here to U.S. audiences. Join Cinespia for a gothic masquerade and the film of the 2022 season with this one.