Home Art In a Digital World, There’s Something Radical About The Church of Type 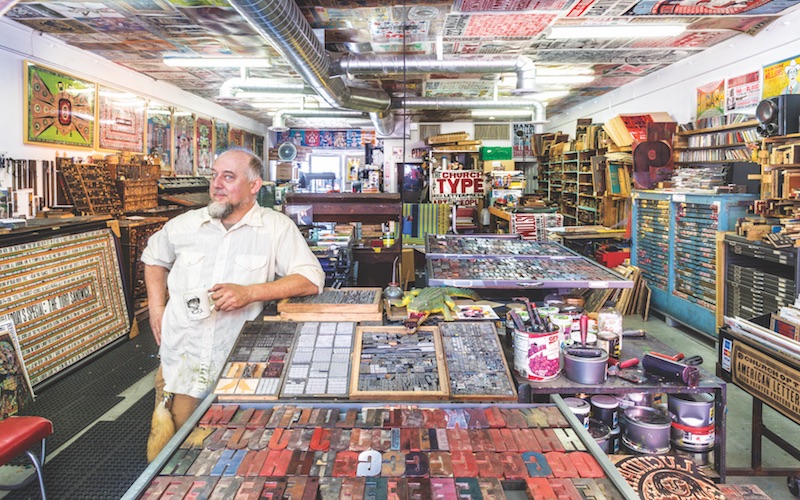 Smack in the middle of a bustling stretch of Pico Boulevard in Santa Monica, wedged between a framing shop and a patisserie, sits a house of worship unlike any other. It has no steeples or stained glass windows, no pews or crosses. The higher authority revered here? Pots of ink, rolls of fine French archival paper, and myriad letters in the form of tiny lead blocks, big metal plates, and intricate hand-carved wood fonts from hundreds of years ago. A couple of hulking vintage Vandercook printing presses—Cadillacs of the trade and prized possessions—also take refuge among the 30 tons of gear strewn about the place.

Welcome to the Church of Type, equal parts letterpress print operation, retail poster shop, art gallery, and fever dream-inspired carnival fun zone. But most of all, it celebrates the centuries old technique of printing à la Gutenberg, using handmade, hand-set lettering and rough-hewn, folksy imagery. The presiding minister of madness is one Kevin Bradley, a loquacious 53-year-old Tennessee artist prone to wearing a coonskin cap (“I was born in Greeneville,” he says proudly, “home of Davy Crockett!”) and blasting arcane Johnny Cash recordings throughout the shop.

The Church of Type is plastered floor to ceiling with posters, handbills, and signage—some for corporate clients such as MTV, Ralph Lauren’s Double RL, and Mattel Toys, while others are original art pieces by Bradley. There are concert posters for musicians both obscure (give it up for the Labiators) and renowned (Cash, of course, but also Hank Williams, the Ramones, Tammy Wynette, and Lucinda Williams), signs for BBQ joints, artwork for a Jack Daniels whiskey campaign, and album cover for a superlimited-edition KFC promotional vinyl album called The Nashville Colonel and His Fabulous Band. Masked Mexican wrestlers fight for space among the bins of prints, too. And then there are dozens of images of robots, Frankensteined together using letters from the type collection Bradley has amassed over the years.

You’ll find plenty of political art as well, including posters from Barack Obama’s two presidential campaigns. Bradley created them when he was based in Knoxville under the shingle Yee-Haw Industries. But those wicked takedowns of Number 45? They’re a personal project.

The affable pressman began his career straight out of design school at Nashville’s Hatch Show Print, a nearly 140-year-old letterpress shop as integral to the country music scene as the Grand Ole Opry. He moved to Southern California a few years ago, as a fluke, after a planned relocation to New Orleans was unexpectedly diverted by a flood (the landlord offered his shop space to a displaced family member). Bradley found the clime here to his liking, if not exactly the clientele. “This is an odd place for me to be,” he admits. “I specialize in posters. You’d think L.A., with its music and entertainment business, would be a big poster town, but it just isn’t.”

Bradley’s isn’t the only letterpress shop in the city, but it’s definitely the most idiosyncratic. What really sets him apart, both as master printer and fine folk artist, is that he’s a purist even among the purists letterpress printing tends to attract. For one thing, he designs by hand, using computers only minimally. “The term ‘letterpress’ is bandied about—it’s all the rage,” he says, “but digital reproduction from a Mac isn’t real letterpress. I’m not a total Luddite; I just chose not to go that method because I have the type. I still carve wood blocks, so I keep it authentic and genuine.”

Perhaps the best example of that authenticity is a series he calls, simply, “Storyville”: film noirish, Hunter S. Thompson-esque tales of private eyes, Russian spies, and badass girls and guys on the lam, told through epic-size works of spiraling, vertigo-inducing hand-set type. They’re one-of-a-kind pieces that will set a collector back seven to ten grand, a labor-intensive bargain that shouldn’t be haggled over. (We’re talking to you, “drunk real estate guys who came in the other night asking for six of them—at half price,” says Bradley with a roll of the eyes. “I said, ‘Yeah…um, no.’”)

At the other end of the investment spectrum, a small poster on brown card stock (“Rough as a cob!” he exclaims) can be had for a paltry 20 bucks. After all, goes the mantra of this man on a mission: “Art for the people.”