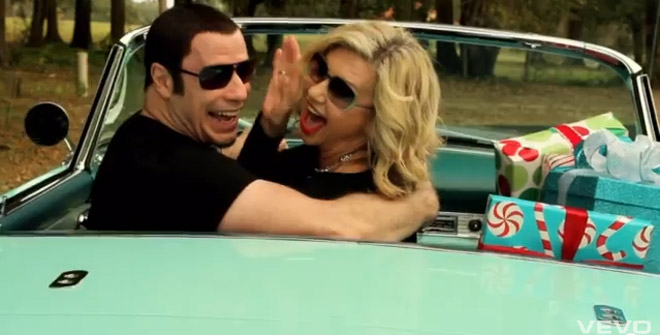 There’s a world of cheerful shlock where things like Donny & Marie, Dancing With the Stars, and Duran Duran reunions exist. Then there’s the Land Beyond Cheese, a galaxy where stars — and those who wish they were — shamelessly try to parlay their waning (or non-existent) appeal into anything that will sell.

In that world, John Travolta and Olivia Newton-John haven’t aged a day beyond their Grease-y teenage alter-egos. In that world, they release a duet that’s so bland you’ll forget the tune while the song is still playing. In that world, they line-dance. And they do it all in what looks like an suburban ghost town but turns out to be a small airport in Ocala, Florida.

On the upside, they’ve managed to make Lawrence Welk look gangsta by creating the whitest video of the year, maybe of all time. “I Think You Might Like It”? Mmmm… not in that way.

(Some videos are just too mind-blowing to wait the five days until Music Video Monday.)