Home Film A Christian Film Fest in Bakersfield Is Churning Out the Next Gen... 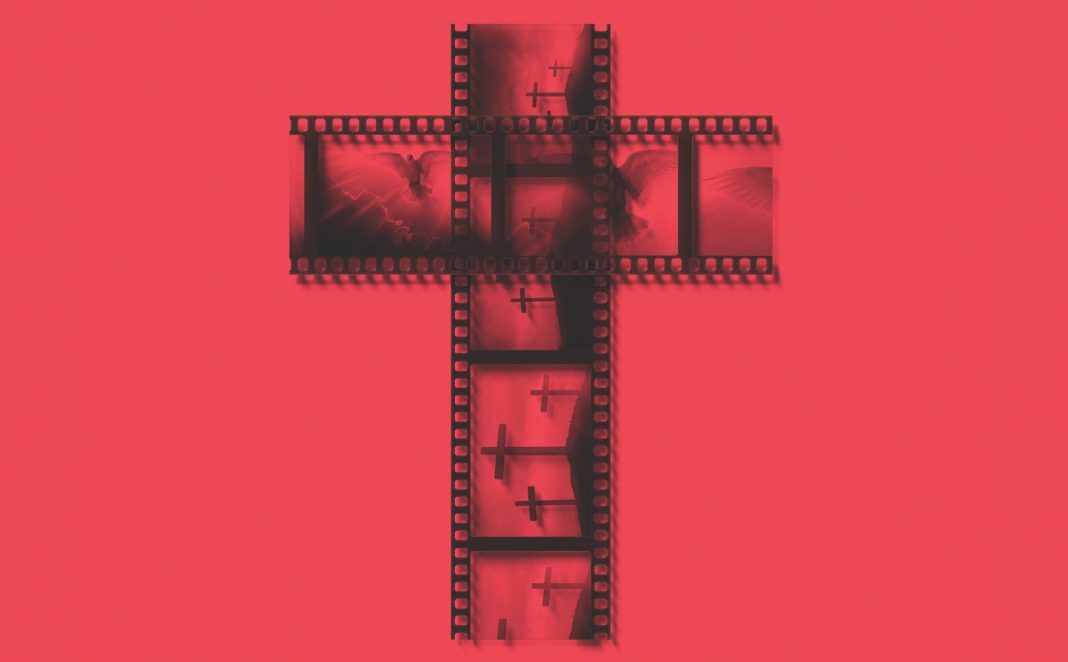 On a folding table in the wings of a darkened theater, a dozenish Oscar-like statuettes—their nameplates as of yet unengraved—glimmer in the faint green lights of a mixing console. Best Picture. Best Actress. Best Screenplay. Best Application of Scripture.

Music swells. Applause erupts. Onstage a spotlight comes up, and a thoroughly unglamorous man in a tuxedo jacket and dad jeans approaches the podium. This is Joe Brown. He’s got a close-cropped gray beard and a web of laugh lines radiating from the corners of his eyes. There’s the sparkle of self-satire about him, a pastorly variant of that Shia LaBeouf-ian “sincerity with a wink” (sans LaBeouf’s penchant for self-sabotage). Brown leans in to the mic and speaks:

“Welcome to the Christian Youth Film Festival.” Everybody cheers.

As far as I can tell, the festival is the longest running—if not the only one, period—specifically geared to young Christians. CYFF will celebrated its 25th anniversary the weekend of March 2 at the Fox Theater in Bakersfield. Yes, Bakersfield: butt of climatological jokes (it’s very hot); bastion of conservatism; a city primarily known for agribusiness, oil, meth, and that one shout-out in Castaway. Despite appearances, a festival celebrating the cinematic output of teen aesthetes isn’t as random as it seems. Bakersfield leans pretty strongly to the religious right (assuming the bumper stickers are anything to go by), and its proximity to L.A. makes a faction hungry for cultural sway feel as though the glitz of Hollywood is within reach.

For decades, Brown was a youth pastor at Bakersfield’s Heritage Bible Church. It was there in 1994 that he started hosting a film fest for local youth groups. The event was mostly for fun—a mock Academy Awards soiree with fake trophies, actual limousines, and soda in champagne glasses. But as consumer-grade videography tech became increasingly accessible and, in turn, enabled kids to scrape together movies with just a digital camcorder and free trial of Final Cut, the level of competition increased. Brown began awarding cash prizes (up to $1,234.56 for Best Picture—that number alone demonstrative of Brown’s sense of humor), brought in anyone who was tangentially linked to the film industry to judge, hosted an annual workshop to teach basic filmmaking skills, and eventually introduced low-fi Sundance labs-style weekend film camps. Submissions trickled in from around the nation—then from Canada, Mexico, Iran; most of the out-of-town entrants discovered the fest via happenstantial Google search. Four years ago, Brown resigned from his pastoral role to go full time as executive director of what is now the Christian Youth Film Society.

Now, in 2019, he’s poised for his biggest move yet. “This is a big deal—we’re gonna produce a 90-minute movie,” he says. “We’re going to do it in three weeks at a resort up in the mountains. It’ll be almost like a summer camp, only the kids don’t pay to go. We pay them.”

The point of all of this is to raise a generation of filmmakers “with conviction and with truth,” Brown says, and send them off into Hollywood—or Atlanta (“a real hub for Christian movies right now”). Because, oh, man, is there a market for this kind of thing.

Long a hallmark of mainstream filmmaking (recall the days of studio epics like Ben-Hur), the feel-good faith-based movie saw something of a decline heading into the ’90s, then reemerged as an exploitable genre in 2004 with Mel Gibson’s The Passion of the Christ (to the tune of $370 million). Producers Mark Burnett and Roma Downey have been cranking out Scripture-centric movies and TV since The Bible miniseries in 2013, and the streaming service Pure Flix burst on to the popular consciousness with God’s Not Dead in 2014 (and let’s not forget the unsung FishFlix and Crossflix). Just last year, I Can Only Imagine drummed up $80 million in box-office stubs on a budget of $7 million. That’s not huge by industry standards, but it’s a solid return on investment, proving there are bux to be earned in the name of Jesus (and we haven’t even touched on the not-too-overt faith-friendly stuff like the Narnia series, Angelina Jolie’s Unbroken, et al.).

All of this is to say: Brown’s ambitions aren’t lofty ones. But he also knows that, statistically, he’s not setting kids up for particularly lucrative careers. Of those who do wind up in the business, he says, “most will just barely eke out a living, but they’ll be doing something that they love.” That’s fine by him. Brown is as thrilled to share stories about past festival winners who work in a local church’s media department as he is the ones working for DreamWorks. Or, as it happens, writing for magazines.

I’m a Bakersfield boy, born and raised (though it somehow took me until now to discover Merle Haggard), and the Christian Youth Film Festival was the defining experience of my high school career. For three consecutive years, several of my closest friends and I broke out our camcorders and cobbled together a ten-minute short. You know, something thematically heavy-handed like LOGLINE: A ragtag posse of inept thieves connives to steal a mysterious MacGuffin of inestimable worth. (Spoiler: It’s a Bible.) My favorite has always been our ’70s period piece, an Easy Rider-esque road movie about a young seminarian who winds up carpooling through the desert with a bunch of gone-to-seed hippies—and decides, naturally, to win the hippies over to Christ.

When my friend Andrew showed me his first draft of the script, it ended this way: Our hero, having tried and failed to lead his new friends to the Lord, comes to the fork in the road where they must part ways. As he steps out onto his solo path, he turns back to offer up a last-ditch altar call. But before he can even get the words out of his mouth, the hippies, in unison, shout, “No!” CUT TO BLACK.

Teen Me was uncomfortable with this seeming irresolution, so I used my directorial authority to make Andrew write an epilogue: We fade in on a church, and who should walk though its doors but the most-adamantly anti-God hippie of them all—humbled, penitent, and ready to soak up some substitutionarily atoned-for grace. Only then did the credits roll.

The epilogue was necessary, I felt, because without it, our film didn’t demonstrate that Christianity “worked.” Sure, maybe none of us had ever converted anyone, but the denouement was aspirational—a vision of the ideal. We had to include some actual salvation action if we were to express not just an experiential slice of life in the faith but the totality of the Christian worldview.

Brown’s MO for the festival and its ancillary programs, he says, is to help “kids understand what a Christian worldview is—how to articulate that and how to stand firm on that faith.” The term “worldview” is practically a trademark of Evangelicalism. It originated as a translation of the German concept of weltanschauung—itself coined by Kant and later defined by Freud as “an intellectual construction which solves all the problems of our existence uniformly on the basis of one overriding hypothesis.” It entered the Protestant vernacular in the late 1800s, but, more recently, the term was propagated by fundamentalist theologian Francis Schaeffer, filtering down to the likes of Brown via Nixon-adviser-turned-Evangelical-radio-personality Chuck Colson. Guys like Colson promoted worldview thinking as a defense mechanism—a mode of constructing an airtight conception of reality that could repel even the canniest secular attack.

In the resurgence of Christian cinema over the past decade and a half, filmmakers’ unique power to construct reality on screen has proved—perhaps troublingly—lucrative. There are exceptions, but the majority of movies in the genre impose a worldview on their universes to a degree that feels unsportsmanlike: Secularist straw-man villains are handily defeated; the Lord is indisputably on the protagonist’s side. When a character experiences the hand of God in a Christian movie, we aren’t merely witnessing the character’s perception of events as such. Instead, what we are made to witness is the hand of God. If a broken car miraculously starts, it’s our Heavenly Father’s doing. When the wind shifts so a Christian football team can kick the winning field goal, the King of Kings is showing His support.

Granted, filmic reality is by nature constructed—“Art is a lie that makes us realize truth,” Picasso supposedly said—yet there’s a deeper dishonesty in the way these stories are designed. Their audience believes in an order beyond the scope of the observable universe—a purposefulness in every event that will never be fully evident. Such is the sum and substance of faith. Yet here that inscrutable divine plan is made manifest on a gratuitously concrete level; God is trotted out like a trained dog and forced to do the director’s bidding. This kind of compulsory certitude is certainly not unique to religious film, but it’s here implied that it’s always struck me as most presumptuous. But who am I to talk? Teen Me insisted on this very thing: supplying fictional proof that God is at work and that my worldview is airtight.

Is it possible that the Christian Youth Film Festival is equipping the next generation of insufferable propagandists? Sure. But I doubt it.

There’s an upside to all of this. The thing about structuring a film festival around the idea of worldview, as Brown has done, is that, at a basic level, you’re training kids to build stories on the bedrock of theme rather than the linkage of sequential events. Not that there’s anything wrong with the shoot-’em-up action shorts that every teen seems to make by default; it’s just that Brown’s approach reinforces the hard-learned awareness that each tool in the filmmaker’s belt should be used—as screenwriting guru John Truby would put it—in service of “moral vision.” Brown explains to me how the workshops and camps focus on demonstrating the ways that writing, acting, and even pulling focus or dollying the camera all reinforce theme; the kids behind the camera make stylistic decisions not just because they’re cool, but because they’re functional. That’s an essential first step toward film literacy. These youths are ahead of the curve.

Is it possible that the Christian Youth Film Festival is equipping the next generation of insufferable propagandists? Sure. But I doubt it. Their ideas may skew juvenile now, but the kids’ll develop nuance, and maybe even make films that “in order to justly be called truthful…unite within themselves dialectically contradictory phenomena,” as the great Russian auteur Andrei Tarkovsky put it. Maybe their work will eventually embody the humility and self-critique implicit in only the most-moving religious films, like Paul Schrader’s First Reformed and Martin Scorsese’s Silence. Maybe not. I can only speak for myself.

If I were to revisit that short film I made in high school now, I’d stick with the original ending. The seminarian embarks on a journey with his hippie friends. Ideas are exchanged. Ideologies clash. Maybe our characters all gain something along the way. But there’d be no smug sense of superiority in being right all along. That first ending spoke more truly to the disillusionment and desperate hope of the foiled Evangelist, to the aching human longing for connection—to the nature of life. It echoed the conclusion of the all-too-brief metaphorical road trip, which, regardless of the slapdash worldviews we design and debate, requires that we all part ways in the end when we CUT TO BLACK.

RELATED: Life Through the Lens of Faith

The Vampire Western Noir Set in Iran and Filmed Near Bakersfield