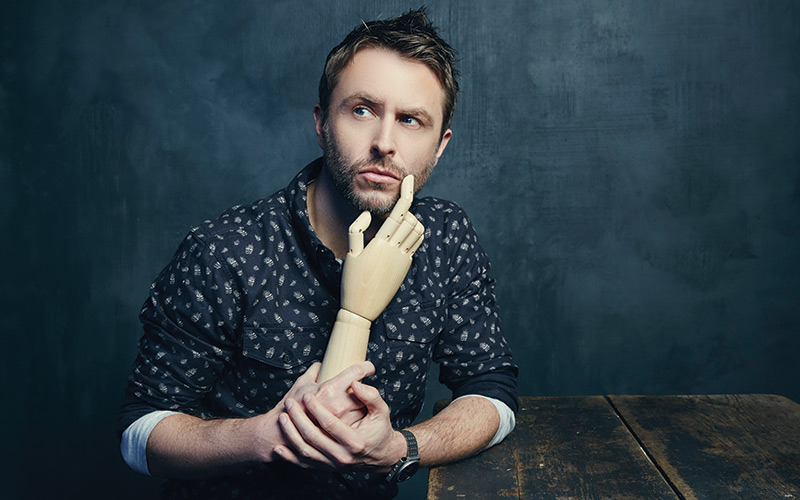 If you feel like Chris Hardwick is everywhere, that’s because he is: The 45-year-old emcees the Comedy Central improv game show @midnight and NBC’s The Wall (Who Wants to Be a Millionaire meets Plinko); he dissects the zombie apocalypse as the host of AMC’s The Talking Dead; and he’s the founder of Nerdist, a cultural commonwealth of podcasts, articles, videos, and live performances (the Nerdist Showroom at Meltdown Comics is a venue of Hardwick’s design). Not bad for a Kentucky-born kid making a way for himself in L.A.

“I love L.A. Other cities seem to be in a one sided war with us. San Franciscans rip on L.A., New Yorkers rip on L.A.—until it’s pilot season and all of those people come out here.”

While maintaining nerd-mogul status is challenging—think of all the TV you’d have to watch, then tweet about—Hardwick still makes time for stand-up. This month he appears on Comedy Central’s The Comedy Jam, premiering March 22, a series in which comedians sing a song backed by a live band. (It’s based on a monthly show at the Roxy.) Hardwick is a ringer: He originated the role of Stacee Jaxx in L.A.’s pre-Broadway production of Rock of Ages; on The Comedy Jam he belts Jon Bon Jovi’s “Wanted Dead or Alive,” which is one of Jaxx’s big numbers. “I perform it in full ’80s garb, and Richie Sambora plays on it,” he says. “It was fucking amazing—it was the best karaoke experience I’ve had in my life.” Here Hardwick talks his fantasy lineup for @midnight and how a zombie might fare on The Price Is Right.

Three fictional characters you’d have on @midnight ?
David Tennant’s doctor from Doctor Who because I feel like he was the most comedy doctor. Also, because he’s so smart, I feel like he would be two rounds ahead of the show. And then he’d be able to jump forward in time and game the system a little bit. So I think he’d be great. Then Spock, because he would have no fucking idea what was going on. Intellectually he would know, but his incredibly logical answers to comedy questions would make it ten times funnier. And then I would have Salacious Crumb, the Muppety-looking guy from Star Wars, to go “HA HA HA!” the entire time. That hits a lot of my likes.

Fantastical form of transportation that’d be most useful in L.A.?
I mean, short of like, teleportation, we could use a good Floo system. Although I feel like we’d still find a way to create traffic. Like, taking the Floo system to Santa Monica would still take you 45 minutes on a slow day. So the Floo system would be great east of the 405, but it would still be shit trying to get west of the 405.

If your stand-up mic was also a superhero gadget, what would it be?
It would be a magic wand. It would have a phoenix feather in it. It would be a Potter wand. Or, the other option is Lightsaber. If I have what looks like a wireless mic, and I’m going into the crowd and talking to people, and some drunk asshole heckles me and threatens to beat the shit out of me, I just flick the switch and the beam comes out. I take off his arm, and he shuts up.

Dream zombie-centric game on The Price Is Right?
The Mountain Climber game, where a tiny zombie is trying to get up the hill while that yodel music is playing. But are people the contestants, or are zombies the contestants? I feel like the zombie growl sounds like “ONE DOLLAR”—they would just be bidding one dollar the whole time.

They’d probably be doing better than most humans in that case.
They’d never be able to spin the wheel, though. The wheel is very heavy. A walker would grab the wheel to spin it and their fucking arms would just come off. Zombies are soft, like Brie—I don’t think a zombie would be able to get the wheel around one complete time. All of them would be disqualified. They’d never make it to the Showcase Showdown. Drew Carey would be like, “Well, I guess this is over.” And is it Drew, or is it zombie Drew? Or is it zombie Bob Barker? Did zombie Bob Barker bite Drew and turn Drew into zombie Drew? Did zombie Bob Barker tell you to spay and neuter your zombie pets?

So many unanswered questions in this hypothetical universe.
Is it called The Price is Bite, and if you don’t win they throw you into a pit of zombies? I don’t know. I honestly don’t know. What happens to the game shows in a zombie apocalypse? There are are so many possibilities.

Pick a doctor who might actually be able to save your life: Dr. Strangelove, Dr. Who, or Dr. Bunsen Honeydew.
Dr. Bunsen Honeydew, as delightful as he is, you see what happens to Beaker every time. So he probably wouldn’t be good. Dr. Strangelove drops bombs on people. He wanted to create an underground society of survivors. The doctor from Dr. Who is really the one.

Character you’d dress up as on the Walk of Fame?
I feel like I’ve done this a million times at ComicCon already. Marty McFly or Deadpool. I think Marty McFly. One year on @midnight, my Halloween costume was Luke Skywalker Texas Ranger. I wore a cowboy hat and boots, but then I had the robe, and the Lightsaber was in a holster. That’d be a fun one.

Three L.A.-based comedians you’d recruit for a Quidditch team?
Doug Benson, because the exhaust from his broom would be weed exhaust, which obviously would fluster the other team, get them super high, and throw them off their game. So Doug. I definitely think Ron Funches, because every team needs a Funches, no matter what it is. And there’s a comedian named Tiffany Haddish who’d be super badass on a Quidditch pitch. That’s my dream team.

If The Wall represented L.A. foods instead of money, what would you want a million of?
Oh wow. Oh man. Lucifers Pizza. What’s else? Oh! Holy shit! The homemade pop tarts at Fred 62. And a million Blue Star Donuts. Pizza, pop tarts, and doughnuts because I’m fucking 12 years old.