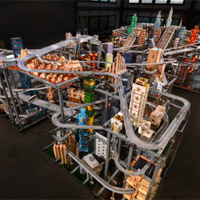 Chris Burden has done it again. His newest work of art made its debut over last weekend at the Los Angeles County Museum of Art.

Burden’s “Metropolis II” is a complex kinetic sculpture that resembles a fast-paced modern city complete with roadways, freeways, sky-high buildings and cars—lots and lots of cars. It is a scale model of Burden’s vision of L.A.’s future, one that’s filled with driverless car racing through the city on autopilot.

Burden is no stranger to LACMA. H designed “Urban Light,” the installation of 202 iconic street lamps that adorns the museum’s front yard.

Early Monday afternoon, a long line of spectators, young and old, anxiously waited to see “Metropolis II.” When the model cars finally started racing through the tracks the crowd applauded and drowned out the piece’s whizzing sound with oohs and ahhs. I was almost blinded by the excessive flashing when everyone took out their smart phones and cameras to shoot pictures and video at once.

“Metropolis II” pulses with energy as 1,100 miniature toy cars shoot through 18 roadways, including a six-lane freeway. The cars move so quickly they pass in colorful blurs. The cars are powered by an magnetized conveyor belt that sends the cars down pre-determined routes with the push of gravity, traveling at a scale speed of 240 mph. The electric trains, on the other hand, chug nonchalantly at a much slower pace.

In the center of it all stood an operator appropriately dressed in a mechanics uniform, on alert for any toy car pile-ups.

As I watched the little cars zoom by I picture myself renting a sweet apartment in the tallest and most shinny building in Metropolis. What I admired most was not the high speed traveling Hot Wheels, but rather the futuristic architecture of the buildings, towers, and skyscrapers. Each has an unique abstract design, constructed from different materials and embellished with beautiful, eye-catching colors. The oddly shaped buildings are unrealistic, but that’s what makes them wonderful.

Studying the sculpture, I couldn’t help but think about how freeway obsessed we Angelenos are. Most of us certainly traveled on freeways to get there, then we waited in line to admire a miniature version of what we experience everyday in L.A.

The exhibit will be operating Fridays through Sundays only. Click here for viewing schedule.