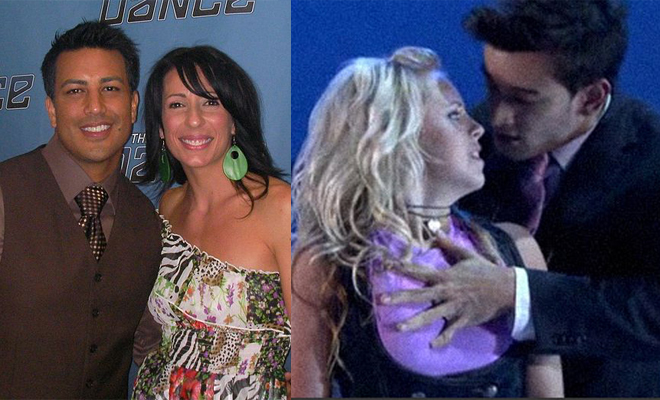 Tabitha and Napoleon Dumo have made a name for themselves as inventive, envelope-pushing choreographers on So You Think You Can Dance. NappyTabs, as the husband and wife duo is known, is famous for developing the lyrical hip-hop style that they debuted on Season 4 with Bleeding Love, which earned them their first Emmy nod in 2009. They won an Emmy in 2011 for Outstanding Choreography for their pieces Scars, Fallin’, and Outta Your Mind. When they learned they were nominated again this year, they were surprised.

“We didn’t even think we’d get nominated, to be honest,” says Tabitha. “There’s so much amazing dance on television, we were just like, ‘We’ll see. We’ll put something in.”

As much as they’re known for hip-hop, their nominations this year are for pieces that move away from the style: Call of the Wild (Circle Of Life), Beautiful People, and particularly Love Cats. This may confuse the producers, who try to keep the styles distinct.

“On SYTYCD, they really want to try to narrow down the lane that you’re in,” Tabitha explains. “It’s trying to give the audience something they can feel knowledgeable about. The show has really educated America about dance.”

The confusion about their nominated pieces may also have reached the audience. “That first piece we did was not hip-hop at all,” Napoleon says about Love Cats. “Cat [Deeley, the host] introduced it as a hip-hop. During dress rehearsal, we made it very clear that it’s jazz-fusion.”

“We just wanted to try something a little different, have a little fun,” says Tabitha. “It’s a struggle for us to always find things that put the dancers in the right lane, that they can succeed at but yet be challenged.”

The duo has been working together since the early 1990s when they met in college. It’s fun to see how they speak for each other and share the same sentiments. It shows how well they collaborate, and ties in with their approach to choreography.

“There’s a sense of freestyling when you’re choreographing because you’re listening to the song and doing what comes naturally,” Tabitha says, “but with choreography you have to remember it and structure it and break it down. We always try to put a journey to it. There’s a beginning and a middle and an end, or a climax, or a moment where we feel like we have to add a little humor or have that big crescendo in the music emotionally. It starts with a song that you love and that speaks to you—”

“It starts with a song that you get cleared,” interrupts Napoleon, with a laugh. Obtaining permissions is always difficult for the choreographers on SYTYCD. Some artists, especially in hip-hop, feel that the show is too commercial. Napoleon offers a reason for one singer that is at least understandable: “Justin Timberlake only wants people to visualize him dancing to the music, not anything else,” he says.

Tabitha continues: “So it starts with finding a song that you love, building a scenario in your mind, and then—”

“Guessing on who you think you might get,” says Napoleon.

“That’s a big part of it. You can have an idea all you want, but smart choreographers can’t be so stubborn and stick to the idea. You have to be able to abandon it, find a new direction, and find it quickly, because you only really have about four and a half hours with them.”

That minimal time frame is both indicative of, and misleading about, just how busy the contestants are on the show. With a relatively short rehearsal period, you wonder what they do with the rest of the week.

“When you think they have down-time, they’re actually in an 8 hour rehearsal for group routines,” explains Tabitha. “In between that, they’re going to fittings and working on their solos. They really have a short amount of time to be together and work hard at mastering what you give them.”

That’s another reason NappyTabs looked to other dance genres.

“[Lifts are] totally inspired from swing dancing or Mexican wresting and adagio couples,” says Tabitha. “We get inspired by the visuals they create but we don’t have an acrobat at that level, so we modify it to our style of movement.”

“We have other ideas of what we want to do, but most of the tricks in hip-hop come from being a b-boy,” says Napoleon, “but you can’t learn it in one day. Whereas some of the swing movement is very simplistic; you can learn it in 20 minutes. We would do other lifts but it can’t look contemporary, and if you have a contemporary dancer doing the lift, it will tend to look contemporary. Many of the swing lifts are very choppy so it can appear more hip-hop-esque, and that’s why we tend to go with those.”

The name NappyTabs comes from their line of urban dancewear, which was popularized on the show and not, as many people think, the other way around.

“So many people were wearing it on the show when we came on,” says Napoleon, “[Executive producer] Nigel [Lythgoe] said ‘That’s cool. I’ll just start calling you NappyTabs and people will find the clothing line.’ So it was really nice of him to brand us as such.”

Though the couple has already been honored by the Emmys, they know this is no ordinary year.

“It’s huge because it’s never been done before, we’ve never been recognized at that level,” says Tabitha. “We’ve always been recognized as a support, and now they’re saying no, we’re not the appetizer, we’re the main dish. Which is awesome and then scary at the same time. It’s going to go down in history. I’m just excited to be lumped in with all of them, to have this opportunity, regardless of the outcome.”

Here’s a bonus video with the choreographers discussing what hip-hop sounds like, who’ll win the Emmys, twerking, and more.