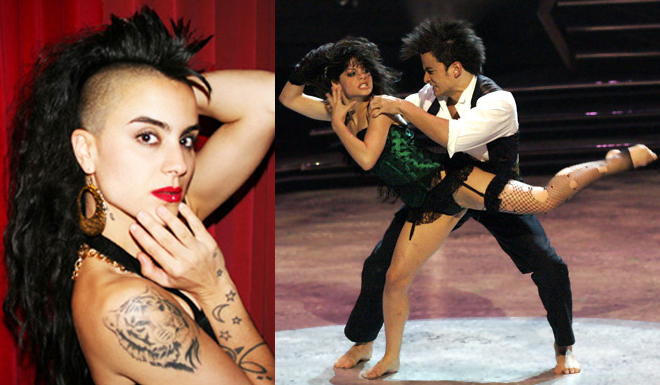 Sonya Tayeh’s appearance is memorable, to say the least. Her jet black Mohawk, darkened cat eyes, and various piercings may look fierce, but Tayeh is sweet, approachable, and eager to open up about her work. The jazz and contemporary choreographer debuted on So You Think You Can Dance in Season 4 (2008), stunning everyone with her unique aesthetic. For many, her first piece is still their favorite: The Garden, danced by Mark Kanemura and Courtney Galiano. Sonya’s use of electronic music, angular walks, quirky movements, and sexy flirtations created a striking impression that immediately made her a favorite on the show.

Fortunately for Tayeh, her career also started quickly though her training didn’t. Unlike most female dancers (males often start later), who begin training as early as age three, Tayeh took her first dance classes the year before she went to college. With the help of patient, “wonderfully supportive, godlike professors,” she eventually earned a degree in dance at Wayne State University. She knows she’s lucky, but she also brought focus and determination.

“I went to maybe six studios that refused to even let me take a class,” she says. “Because I was older, they didn’t know what to do with me. That’s why I pride myself on the way I teach. I would never say you can’t, I would never say it’s too late.”

She is aware of the effect SYTYCD has had on her career, in terms of hiring and commissions, having her videos at her fingertips, meeting dancers from all over the world, and making best friends. Like others, she is also extremely proud of what the show does for dance.

“[Executive producer] Nigel [Lythgoe] loves dance. He represents dance in a really amazing way for the masses to see, for it to be important—because it is,” she explains. “The first episode changed my life completely. I can speak to my mother who’s from Detroit, who is this amazing religious Muslim woman, about dance. I literally call her and we watch it together.”

The show also gives her free reign to explore different genres. “I’m able to try different things and different concepts because I’m on the show all the time,” she explains. “They’re very supportive of me.”

That experimentation paid off this year with her first Emmy nomination for the works Turning Page, Sail, and Possibly Maybe, yet she showed a different aesthetic this past season. Often seen as hard-edged and androgynous, her work had a softer, more romantic feel.

“I was trying new ideas, especially with the Tiffany and George duet,” she says of Turning Page. “I was feeling really content and I had this day-dreamy idea about love lasting forever, of celebrating love and not having any worry or doubt. That was definitely something lighter, this first and really beautiful idea of happiness. I have that in me, people just don’t see it often.”

Tayeh takes an honest approach to her choreography, regardless of how it may turn out. “I’m not one to cater to anything,” she says, “so if it’s instinctually happening for me, that’s what’s happening. My goal is that it comes from the most honest place.”

This honesty is also present in her work Possibly Maybe, Tayeh’s favorite song by the singer Bjork—and she again had to fight for it. When Bjork denied clearance of the song, Tayeh contacted her about it. Bjork asked her to write down what the song meant to her.

“I wrote an extensive explanation of how I wanted to interpret the song, and I sent her reference photos of curved, heavy, sad looking women, and cold, really regal, overly large men,” she says. “The piece is about this woman lacking in self worth and wanting desperately for this man to love her, and this man who is entertained by that power and by her sadness. Pretty dark intention but I’ve been both of those people so I wanted to embrace it. She said yes.”

Tayeh strives to find that honesty with the dancers as well. “I really hone in on having a moment with the dancers,” she says. “I’m hyper-focused on how they’re feeling. It’s not about ‘is my piece going to be awesome.’ Of course I want it to be but my focus is to have an emotional connection with the dancers. Did I allow them to grow? Did they see something in themselves that they want to change, or that they love? Did I evolve their mind as an artist? It’s always amazing to watch the evolution of a dancer, to see them exploring and realizing things about themselves. You literally watch them grow up. It’s beautiful.”

While Tayeh is thrilled to work with the other choreographers on the big Emmys number, the weight of the situation is crystal clear, too.

“It’s a big deal. It’s the first time we’re on the primetime Emmys and dance is recognized in this way, and we’re going to be there,” she says. “I think about it and I start stuttering. I can’t believe this is happening. It’s a huge moment for us.” While she hopes to win, she is, as the saying goes, happy to be nominated.

“Either way, saying you’re a nominated artist on the Emmys is totally, completely insane. I don’t care where it is. I don’t care if they just called me and said, ‘Congratulations you’re a nominee. Bye!’ and I got a lollipop in the mail, I really don’t care. Win or no win, it’s forever.”