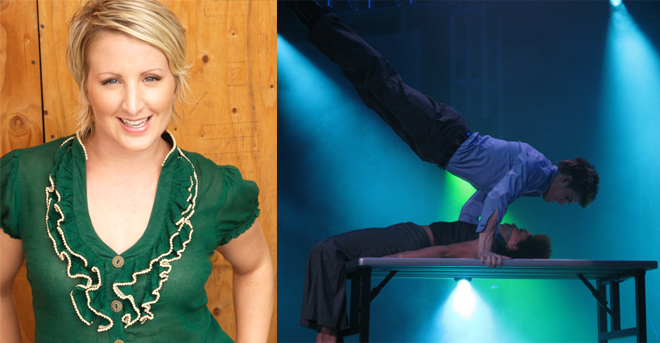 Down to earth and relaxed, choreographer Mandy Moore looks ready for the day’s work in her comfortable t-shirt and pulled back blond hair. Not to be confused with the singer-actress from Tangled—she named her recent corporation Nope Not Her—Moore has been involved with the show So You Think You Can Dance from the start. She was assistant choreographer on American Idol when executive producer Nigel Lythgoe had the idea for the dance competition and brought Moore in on the creative meetings. She started choreographing for the show in Season 3 and caught everyone’s attention with her “table” routine, Sweet Dreams (Are Made Of This), which also earned Moore her first Emmy nomination. She was nominated again in 2011, and is currently celebrating her third nod for The Power of Love and Wild Horses.

Moore is humble about the nomination and her work. “It’s a very strange feeling to be awarded for something that you would do even if nobody was watching,” she says. “It’s probably ironic, but I don’t feel like I create for everyone to see. For me, creating is a personal thing, a way to tell my story or get out an emotion. Plus it’s my job. I’ve been hired to create art.”

Known as a contemporary and jazz choreographer on SYTYCD, Moore is also familiar with ballroom, tap, folk, and other styles, incorporating them frequently. They came in handy when she choreographed Jennifer Lawrence and Bradley Cooper’s duet in David O. Russell’s 2012 film, Silver Linings Playbook (see the video below for more about the film).

“That number was not supposed to be like any dance routine that had ever been on anything,” she says. They made sure of that by working in many styles, including some that aren’t fully established.

She also credits SYTYCD for helping her get the gig. “One of the producer’s wives watched the show and said, ‘Mandy would be great for this. Why don’t you have a meeting with her?’”

While the Silver Linings routine was something of a mishmash, Moore’s process for working on SYTYCD is more structured. “I’m a planner,” she explains. “I like to have a lot of things in my bag or a skeleton of what I want to do, but I’m also open to if they get it. I have to make sure I don’t give them something that they’re going to look ridiculous doing.”

Many choreographers on the show feel they need to have a concept for their pieces and the producers encourage it. Moore, however, prefers not to lay out a specific concept.

“I think you can get pushed into a corner with it,” she says. “My dad once said, ‘I hate it when they do those packages and they say it’s about something, and then I watch it and I don’t get that, and then I feel stupid as an audience member.’ That’s in my head all the time. Our job as choreographers is to tell you what the story is in the movements. I have a hard time saying ‘This is about this,’ because I think I should leave it to the audience to take what they want from it.”

She also seems to have a penchant for older pop songs, as indicated by her nominated pieces, but it isn’t always her choice. “The producers usually ask me to use them,” she says. “I’ll choreograph to anything. I like versatility; I like to do different kinds of things. I try not to have a formula of what I do.”

Moore is more thrilled to work with the other choreographers for the Emmys broadcast. “Just to be involved with Ken [Ehrlich], the producer, and his entire team, and to create for a show of this magnitude?” she says. “I get off on that. If I win it would be awesome, but every other person who’s nominated should win too.”

Here’s a bonus video with more about the Emmy nomination and working on Silver Linings Playbook, including that crazy lift.