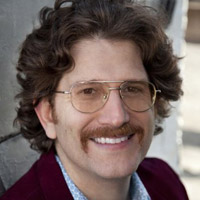 Maurice Williams sits in his apartment nursing a New Yorker when the phone rings. He picks up. “Hello?” Murrrder, answers the possessed voice on the other end of the line. Murrrrder fight. Maurice, strait-laced and anal-retentive, tells the prank caller, “You do not want to dance with this particular gorilla.” He hangs up and relaxes. “New Yorker, why do you come only once a week?” he says.

It’s “married night” at Upright Citizens Brigade theatre, and New York sketch veterans James and Jessica Eason (that’s James, above) headline with D-Bags, A-Holes, and Lovers. While James moves fluidly among characters like Maurice Williams, his Susan Sarandon lookalike spouse portrays the same lusting, middle-aged woman for much of the show. In the second scene she’s Ms. Lois Warner, a narcissistic, bipolar, libidinal executive whose doting assistant, Jeffrey, keeps her afloat. As Jeffrey reads her phone messages aloud, Ms. Warner assumes yoga warrior poses, jabbing the air. Next thing you know she’s hyperventilating on the floor, begging her assistant to call her Lois. And on and on it goes, like squeezing juice from a dried up lemon.

The Easons’ show climaxes in a winning third scene. A lowly messenger and his royal queen turn out to be a couple role-playing before sex. The wife is bursting at the seams because the kids will be home soon, but her husband feels like she’s not inhabiting her roles enough. “You know what?” he says, irked. “T-out. Boner gone.”  After several failed attempts, they try out the roles of DMV worker and customer. “Oh, this license is out of state,” he tells her. “I’ll need a birth certificate.” “How ‘bout this one,” she says, pouring her breasts into his face. “Okay,”—he stops her right there—“boner gone.”

Back at a snooty Maurice’s apartment for the show’s final scene, Maurice and his stalker battle it out by playing iconic songs for each other over the phone and, in keeping with the bizarre tone of the night, the stalker eventually breaks in and snaps Maurice’s neck. “Murder,” she croaks as he falls to the ground. “Fight,” she says, fake-punching him from above.

The twentysomethings who sat stone-faced through D-Bags, A-Holes and Lovers would have been relieved by the next act, fledgling sketch duo the New York Smiths. Hailing from N.Y. comedy troupe, the Harvard Sailing Team, this was only the second performance for Chris and Rebecca Smith as a pair. Their act told the story of a couple, also called Chris and Rebecca, whose relationship is shattered in the first scene when Rebecca admits to Chris that she is not, as she head had let on, from Staten Island.

Chris is appalled to find out that her background is much more sophisticated, that she’s actually from Santa Cruz de Tenerife in the Canary Islands. “What borough is that in?” he demands, distraught. The revelations continue until finally, as Rebecca walks away ashamed, Chris says: “Wait. That time we were in Dave and Buster’s off Route 17 and you beat me at ski ball, was it because of the summers you spent on the Jersey Shore?” She hangs her head. “Bangladesh,” she answers. “Where ski ball was invented.”

Check out the couples’ next show at UCB on Thursday, August 12 at 8p.m., and you’ll be in for seven deftly executed scenes, including a flashback to the happy couple parroting a ‘90s Bollywood music video. Just be sure to choose your couple wisely; chances are you won’t like both.