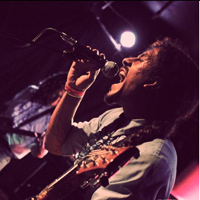 Chicano Batman originated as a doodle in singer Bardo Martinez’s notebook. Sketching the Caped Crusader, he added a thick, black mustache to make the superhero look stereotypically Latino. The resulting character became not only the mascot but also the namesake for the L.A. band, which evolved from a spontaneous parking lot jam session after a cumbia concert.

Since 2008, the quartet of Martinez, guitarist Carlos Arévalo, percussionist Gabriel Villa, and bassist Eduardo Arenas have blended American funk and rock with Columbian cumbia and Brazilian bossa to create a psychedelic, ’60s-tinged sound that’s as idiosyncratic as it is catchy. The band released its second full-length album, Cycles of Existential Rhyme, on February 18. “

We’ve explored a lot of rhythms and we’ve lived a lot of rhythms,” says Arenas. He and his bandmates have resided all over the world, from Paris to Panama, and their fanbase extends across borders, too. They’ve found a particularly eager audience in Japan, much to their surprise. “They have a burgeoning Chicano scene with Japanese people in lowriders, dressing like L.A. gangsters,” says Arenas. “It’s surreal.” The implication isn’t lost on him: “It’s like we’re writing the soundtrack for a new movement.”

Television
Marquee Moon (1977)
“The essential quality of this album has to do with how the band communicates lyrically, melodically, and instrumentally. We try to create that type of open space with our music, too.”

Caetano Veloso
Transa (1972)
“Caetano Veloso was a big part of the Tropicália movement in Brazil, which stood in opposition to the dictatorship. He recorded Transa while exiled in London. It’s a very funky album and a great example of art as revolt.”

Los Ángeles Negros
Y Volveré (1969)
“This band was really big in the South American scene when they started out. Our parents, aunts, and uncles loved this music and we all grew up listening to it. It’s in our blood.”

Caetano Veloso
1968 (1968)
“This album is wild. It has a lot of crazy orchestration and avant-garde elements. It’s bossa nova, samba, and funk all mixed up. There are no rules. I think the sociopolitical context of the time called for something like that.”