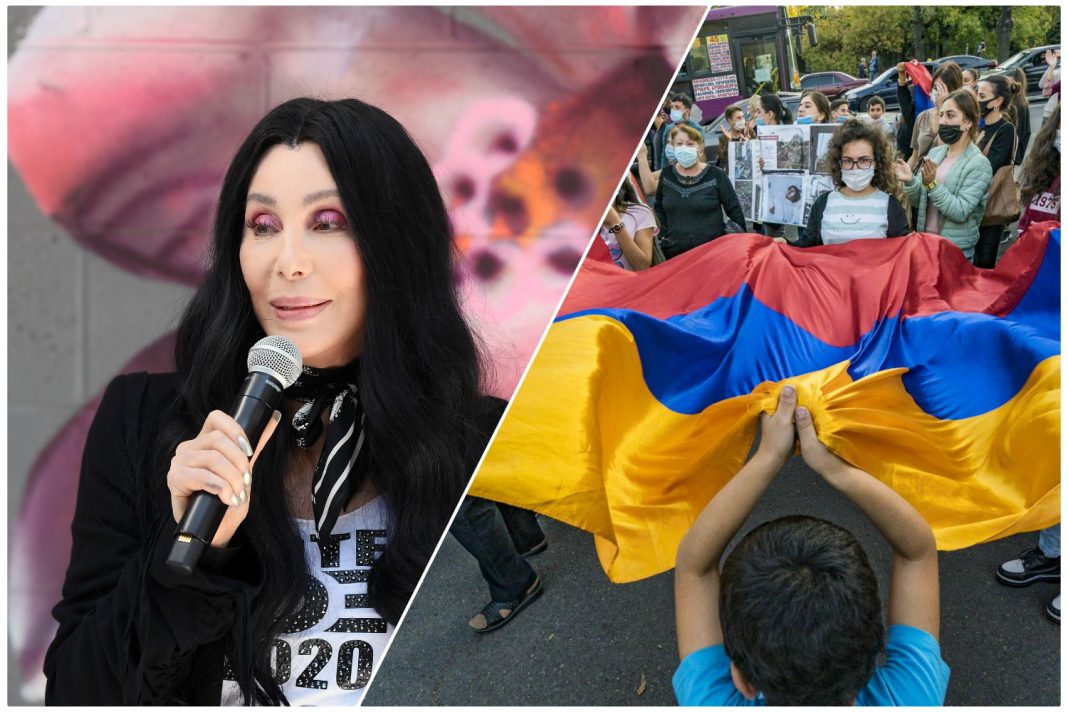 On Wednesday morning, Cher released a public service announcement encouraging viewers to pay attention to Armenia and Artsakh. “The pandemic, election, and other important issues in the world are distracting people from the ethnic cleansing campaign removing Armenian civilians from their ancestral homeland in Artsakh,” she said. But the pop star, who is of Armenian heritage, wasn’t simply raising awareness about a humanitarian crisis that’s been ongoing since late September. She’s urging Americans to contact their elected representatives in support of sanctions against Turkey and Azerbaijan, while continuing the call to raise funds for relief efforts.

Since the ethnic Armenian enclave of Artsakh, known internationally as Nagorno-Karabakh, was attacked by Azerbaijan on September 27, the global Armenian diaspora has responded with protests and fundraisers. In the United States, where the news was overshadowed by the 2020 presidential election and the uncontrolled spread of COVID-19, Armenian-Americans and their allies have been particularly vocal. Included in this mass of voices have been influential Armenian-Americans, from System of a Down’s Serj Tankian to Reddit cofounder Alexis Ohanian to celebrity makeup artist Hrush Achemyan. Since fighting ceased earlier this week, all of these voices will likely become more crucial.

Armenia’s Prime Minister described the recent agreement in the region, brokered by Russia, as “unspeakably painful,” and that was evident in the following days, as Armenians living in areas of Artsakh that will fall under Azerbaijan’s control prepared to leave their homes and humanitarian groups continued to help displaced people.

At the moment, fundraising is a priority. “Since the time that the war broke, 45 days ago, we have had an unprecedented number of donors who have come to the office, who have gone on our website, who have organized and arranged a lot of events where they raised funds,” Maria Mehranian, the L.A.-based president of Armenia Fund U.S., says by phone. Armenia Fund, the best-known of the nonprofits working in Armenia and Artsakh, has raised $80 million in the United States alone from about 260,000 donations, including high-profile donors like Kim Kardashian West, who gave $1 million in October. The work that money funded has included chartering three flights to bring necessary equipment and supplies, like ventilators and generators, to Artsakh and Armenia. The 25-year-old organization will be holding its annual Thanksgiving telethon this year, which will air on KVMD in Los Angeles from 4 to 8 p.m.

“It’s emotionally so engaging to watch how our compatriots in the community came together,” says Mehranian. Armenia Fund is the organization that System of a Down chose when they released their first two songs, their first in over 15 years, in support of Artsakh. On Wednesday, Tankian announced on Instagram that sales of those songs have raised over $600,000.

Although the war has ended, the struggle for action from the U.S. government has continued as well. Advocacy groups Armenian National Committee of America and Armenian Assembly of America have both continued calls for political action following the agreement, and both groups are encouraging enforcement of Section 907 of the Freedom Support Act, which would withhold military aid from Azerbaijan, and would include sanctions on Turkey and humanitarian aid for Armenia.

All of this is important for more than just the large Armenian diaspora in the United States. The U.S. is, along with France and Russia, a cochair of the OSCE-Minsk Group that has been integral to the peace process for the Nagorno-Karabakh War, which came to a ceasefire in 1994. The Trump administration, however, virtually ignored the recent escalation until late October, after both France and Russia negotiated failed humanitarian ceasefires, when then-opponent Joe Biden released a statement on the conflict and Armenian protesters turned up outside a Trump campaign event in Orange County. Despite Trump’s claim that ending this crisis would be “easy,” the resulting U.S.-negotiated humanitarian ceasefire was also a failure.

Moreover, security aid for Azerbaijan went up significantly under the Trump administration, reaching an estimated $100 million in 2018-2019, and that’s been a concern for both members of Senate and the House of Representatives, who’ve been calling to suspend that aid since early in the conflict.

New Jersey Senator Bob Menendez, the Ranking Member of the Senate Foreign Relations Committee who had previously introduced two resolutions calling for information regarding human rights abuses by Azerbaijan and Turkey and whether or not U.S. security assistance and arms contributed to those, released a statement on Wednesday. He urged the U.S. to take a more active role in the peace process, adding, “Similarly, I am deeply concerned by the role U.S.-provided defense articles may have played in this conflict and especially in attacks on Armenian civilians.”

On November 10, the Congressional Caucus on Armenian Issues, which is co-chaired by Representative Adam Schiff, released a statement in regard to the peace deal. “We are deeply disappointed in the failure of the United States to play a productive role in avoiding this tragic outcome. Since the beginning of the Azeri offensive on September 27, 2020, we have called on the Administration to use all available resources to hold Turkey and Azerbaijan accountable,” it read.

The Armenian Caucus, which includes a number of Los Angeles-area representatives, also reiterated its previous support for the right-to-determination of Artsakh, which is not recognized as an independent country by other nations. Representative Judy Chu tweeted on November 10, “Azerbaijan took advantage of a global pandemic and a US election to wage war on Artsakh & terrorize the people by attacking civilian areas. It’s more important than ever that the US recognize the independent Republic of Artsakh as the only path to lasting peace.”

Azerbaijan took advantage of a global pandemic and a US election to wage war on Artsakh & terrorize the people by attacking civilian areas. It's more important than ever that the US recognize the independent Republic of Artsakh as the only path to lasting peace.

Via Facebook, Representative Brad Sherman made a statement on Wednesday night. “We must not stand for this disastrous deal forced on Armenia,” he wrote. “We must not view it as a final settlement.”

RELATED: Why L.A.’s Armenian Community Wants You to Pay Attention to the Situation in Nagorno-Karabakh