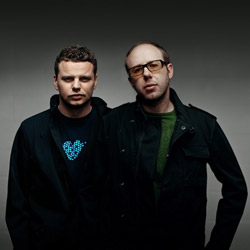 August brought classical music by Gershwin, Tchaikovsky, and Mozart to the Hollywood Bowl. It also brought the Chemical Brothers, which performed with YACHT and Chromeo for KCRW’s World Music Festival.

In the world of electronic music, The Chemical Brothers are king, and seeing a band which is so at home in tightly-packed clubs crisscrossed with rainbow-hued spotlights, playing the Bowl felt like having a dance party in your parent’s fancy mansion when they are on vacation. Okay, so couples popped corks instead of dropping acid before the show, and attendees were dressed more for a casual Sunday out than a rave. People would have to step on the hummus to dance!

After YACHT warmed up the stage, Chromeo took their positions behind their equipment. Canadians P-Thugg and Dave 1 are described in the night’s program as “the only successful Arab/Jew partnership since the dawn of human culture.” Their music is Daft Punk meets the Ghostbuster’s soundtrack, and they were better live than on a studio recording, especially on rollicking songs like “Night by Night.” By the time Chromeo departed the stage, the audience was fed and restless. After a brief intermission, the lights dimmed. The Chemical Brothers sauntered out and proceeded to blast over an hour of non-stop music. They didn’t even introduce themselves or announce their songs. Tracks from their short album Further, such as “Horse Power,” were expected, but favorites like “Star Guitar” and the decade-old “Hey Boy Hey Girl” were great surprises. Picnic items cleared aside, the audience spilled out of their seats and filled the cement slab walkways clutching glow sticks.

The group of five senior season ticket holders sitting next to me who came to the concert “just because” were put off and quietly left. I saw a couple of other early exits, too. But fans of YACHT, Chromeo, and The Chemical Brothers weren’t bothered; it gave us more room to dance.