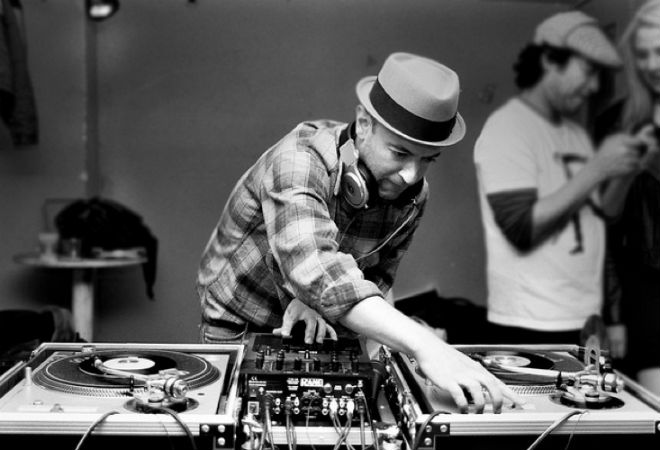 To celebrate the DVD release of Our Vinyl Weighs A Ton, the documentary about Stones Throw Records, the pioneering Los Angeles hip-hop label will hold a day-long extravaganza this Saturday, May 24.

Fellow DJs and friends of Stones Throw founder Chris Manak will be on hand to celebrate the event. Manak, better known as Peanut Butter Wolf, broke through as a DJ in the late ’80s thanks to his collaboration with MC Charizma.

Our Vinyl Weighs A Ton chronicles the birth of Stones Throw Records, its impressive catalogue, and the relationship between Manak and his then-partner Charizma, who was killed in 1993. Since its inception in 1996, Stones Throw has been a prime purveyor of experimental hip-hop, funk, and world music, with a roster of artists that keeps expanding.

To join in the party, head to 5607 N. Figueroa Ave. this Saturday from 3–10 p.m. There will be free beer, lots of food, and, of course, plenty of music will. But before you do, here are four must-know Stones Throw artists.

Wilson is one of the most enigmatic figures in pop history. In 1969, at age 14, he met John Cage, an event that he says changed his perspective on writing music. His 1977 debut, You Think You Really Know Me, remained largely ignored until the early 2000s, when it gained notoriety for its bizarre combination of spoken word-esque lyrics and spacey synths.

DJ Peanut Butter Wolf is best known for founding Stones Throw, but his musical chops are nothing to scoff at. He rose to prominence in the early ‘90s collaborating with MC Charizma (aka Charles Hicks). After Charizma was killed in a shooting in 1993, Manak went on to create Stones Throw Records. The debut release of his new label was a 12″ single, The World Premier, which features himself and Charizma. The record is considered a hip-hop classic.

3. The Lions
It’s nearly impossible not to groove to the Lions’ catchy, mellow, soul-infused reggae. The 12-man orchestra started playing under the name in 2007 and has since garnered much attention for its sound, especially after last year’s release of This Generation, a box set with seven 7″ vinyl singles.

La Habra native Jonwayne is about as close to a hip-hop outside as you’ll find in the genre. With an enviable flow and a poetic ear, he takes listeners on a journey into a bizarre and at times sinister lyrical universe. “This is a repressed manifesto/From the depths of my dwell/Spellbound by a cello swelling treble in my cell.” Lots of demons in this one.