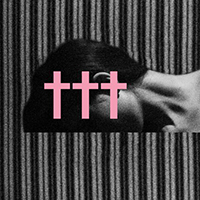 These days, almost anyone with a laptop can put out a record. That doesn’t mean it’ll be good or that it’ll sell. For Shaun Lopez, the co-founder, songwriter, and guitarist of ambient rock outfit ††† (pronounced Crosses), that never mattered. In 2011, he and co-founder Chuck Doom, teamed up with Deftones and Team Sleep frontman Chino Moreno to quietly release a free five-song EP online. It bore little more than a symbol: three pink crosses.

The EP left fans and critics clamoring for more. Shortly after, the duo released another EP in the same manner.  With a record label now supporting them, they put out their full-length, eponymous LP in February. Last weekend, Crosses played Coachella for the first time, and they’re getting ready to brave the sand and sweat for Weekend Two (they’ll take the Mojave stage tonight at 11:55 p.m.). We caught up with Lopez backstage at the band’s sold out show at the Observatory in Santa Ana.

How was your first Coachella?
It was good. We played opposite to OutKast, so we were a little worried going into it, but it actually ended up being a good-sized crowd. I think this weekend will be even better. It was weird but we had some crossover. Some people who I knew were like, “Dude, I can’t believe you guys are playing at that [time]. I’m sorry, but I have to go see Outkast!” I’m like, “Dude, I would go too!”

I would rather have that slot than 1 p.m. or 2 p.m. I don’t think our music is made for the daytime. I’m glad it worked out the way it did. I think this weekend will be even better.

Going into this weekend, are there bands you’re looking forward to seeing?
There are some DJs I want to see this weekend. I want to see A$AP Ferg. There’s this guy, Shlohmo, that I want to see. Saturday is the day for a lot of the stuff I want to see. It’s hard for me to watch bands when we’re playing the same day. I always have trouble. I’m always thinking about shit.
How did ††† came to be?
I met Chuck [Doom] through a friend of a friend. We started making music and were just having fun. No rules. I come from such a guitar background. I’ve also done drum programming and electronic stuff. So this opened the door for me to do that more. Even with the guitar stuff that’s on the record, I was always trying to get it to sound like anything but a guitar. A lot of the sounds on the record that sound like synths are actually guitars.

How did Chino get involved?
Chino and I go way back, since we were kids. I produced some Deftones stuff six or seven years ago, so we’ve worked in the studio together quite a bit. He also loves to work in my studio [The Airport]. He heard this music and was like, “What is this, man? Let me sing on this!” We had a lot of instrumentals by then, so one and two tracks with vocals became three and four. Really quickly we had about seven songs.

You put out your first EP independently online. How did that happen?
There was nothing behind it. There was no marketing team, no publicist. We were kind of taking a chance, but we all believed in the music so much. Luckily, people really spread the word. It was awesome. I feel the best and most real marketing tool is the people. I’m still, to this day, addicted to music. I have to listen to it all the time, read about it. I have to make it. I think for a music fan, it means so much more to find something or have your friend send you a song [rather] than seeing it on MTV or online where it’s being thrown at you through ads or something.

Coming up in the old model of the music industry, was this process freeing?
It was awesome. After we did that, we put out the second EP [the same way] seven months later. Same crazy reaction. After that it felt like we were taking a break. Then all of a sudden this record deal comes about. It makes it that much better than if we had done it the traditional route. It says a lot about the fans and the people who dig the band.

What is the significance of the logo? The cross might be the most recognizable symbol on Earth.
I don’t know. It was just a matter of inspiration. There are three of us, so I basically designed the logo and I put those together. I liked the way it looked. I showed the other guys and they thought it was cool.

What’s on the horizon?
After Coachella, we have a few weeks off and after that we go out for another 10 days. After that it’s all up in the air. There’s a lot of stuff being thrown around. Chuck and I will be in L.A. We write all the music anyway, so we’ll probably get together when Chino goes back into Deftones world.

Crosses will play the Mojave Tent tonight at 11:55 p.m.