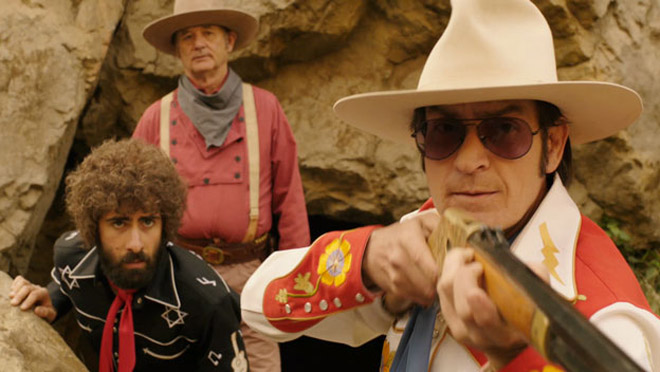 Instead of a classic Peter Gabriel tune, Sheen is blasting the unrelentingly sweet soundtrack of his upcoming film, A Glimpse Inside The Mind of Charles Swan III, which drops today, three days before the release of the film. Directed by Roman Coppola and co-starring Jason Schwatzman and Bill Murray, the movie (set in ’70s Los Angeles) stars Sheen as a sex-fueled graphic designer whose life goes into a tailspin after a romantic bustup. The album oozes the optimism and contrition of a midlife crisis, which is perfect accompaniment for a film that serves as meta-exploration of Sheen’s recent drug-fueled combustion.

Increasingly vintage Chicago rocker Liam Hayes (a.k.a. Plush) lends a mature and weathered gravity to each of the songs. The highlight of the soundtrack is the tender, flirty, and shockingly in-tune duet between Sheen and costar Katheryn Winnick as they cover Antonio Carlos Jobim’s “Águas de Março,” but the entire 22-track album consistently charms. One of the best moments is the final track, a rough demo of the earlier “A Glimpse Inside.” For a movie and a lead actor that so perceptibly embody second chances and regrouping, the melancholy, unpolished version of the titular track is just right.

A Glimpse Inside the Mind of Charles Swan III opens in theaters February 8th.