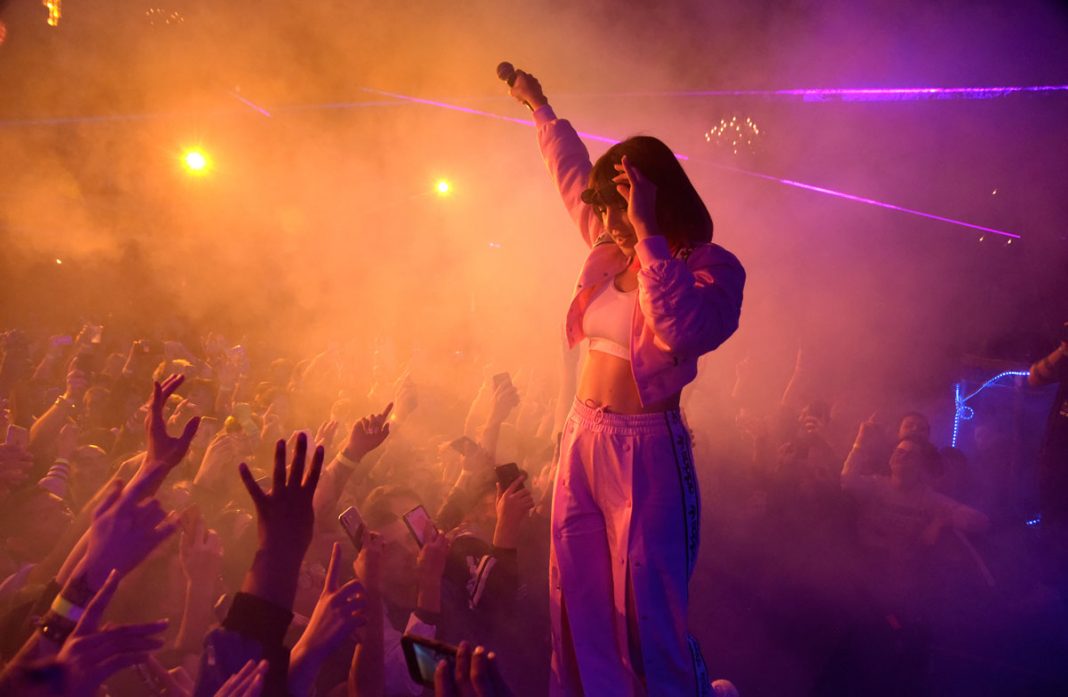 Charli XCX might be one of the few Angelenos who actually seeks out a traffic jam.

For the British singer-songwriter—who splits her time between London and a Beachwood Canyon Tudor—being bumper to bumper on the 101 is when inspiration is most likely to strike. “It’s something that people complain about a lot, but I really enjoy it,” she says over an afternoon coffee in Eagle Rock. “The place I listen to music the most is in the car. There’s something really romantic about looking out the window and—I know this sounds so cheesy—feeling like I’m in a movie.”

Cheesy or not, the unorthodox source of inspiration is serving her well. In the five years since breaking out as a solo star with 2014’s Billboard Top 10 hit “Boom Clap” and her critically lauded second album, Sucker, XCX has become a hugely influential and prolific pop star. Instead of reverting to the album-tour-album-tour cycle most acts fall into, she’s spread her creative DNA across the music world. At 27 she is practically a one-woman industry. “My mind never stops,” she says. “I can handle quiet and calm for 24 hours, and then I freak out.”

She has released scores of stand-alone electro-pop earworms, dropped multiple solo mixtapes (two in 2017 alone), and added killer hooks and wonderfully brash guest vocals to dozens of tracks by the likes of David Guetta, Rita Ora, and Mura Masa. She also has quietly added her songwriting touch to tracks performed by everyone from Blondie to Selena Gomez. The Shawn Mendes and Camila Cabello duet “Señorita,” which XCX cowrote, has been glued to radio playlists and the Billboard Top 10 all summer.

That’s to say nothing of her work as a video director, her periodic stints hosting the Beats 1 radio show The Candy Shop, and forming the label Vroom Vroom. And there’s the smaller matter of opening for Halsey and then Taylor Swift on their arena- and stadium-filling tours in 2017 and 2018, respectively. It’s as if Linda Perry and Lady Gaga had a hyperactive millennial daughter. “There aren’t too many artists that can straddle the pop world and the more left-field world like I do,” XCX says with casual confidence. “I can’t do just one thing—I always have to be doing ten things.”

That flurry of XCX activity is set to become a more sustained torrent with the September 13 release of her third album, Charli. It’s a collection that feels—quite intentionally—more like a curation. It’s a frenzied but exhilarating ride around XCX’s DMs and WhatsApp messages that brings together French electro-pop sophisticate Christine and the Queens on one track, Estonian rapper Tommy Cash on the next, and Brazilian drag queen Pabllo Vittar on another. Over the album’s 15 songs, there are 13 listed collaborators, a few of whom she met out and about in L.A., though she finds the local social scene strange. “The culture here is so different from London and everywhere I’ve ever been,” she says. “You can have a house party, and random fucking people will show up. They find out, they come, and everyone’s cool with it. If that happened in the U.K., you’d change your locks immediately!”

As she prepares to go on tour to promote Charli—she plays the Wiltern on October 1—the question is whether the new album will put XCX front and center and grant her the level of fame enjoyed/endured by some of her more famous collaborators and tour mates. It’s not something XCX is even sure she wants.

“There’s a troll-y, antagonistic part to me, so I feel like I would get in too much trouble if I was doing that on a mainstream level,” she admits, cracking her composure with a slightly guilty laugh.

“I like to get a rise out of people.”

RELATED: How to Have a Hot Girl Summer, Megan Thee Stallion-Style