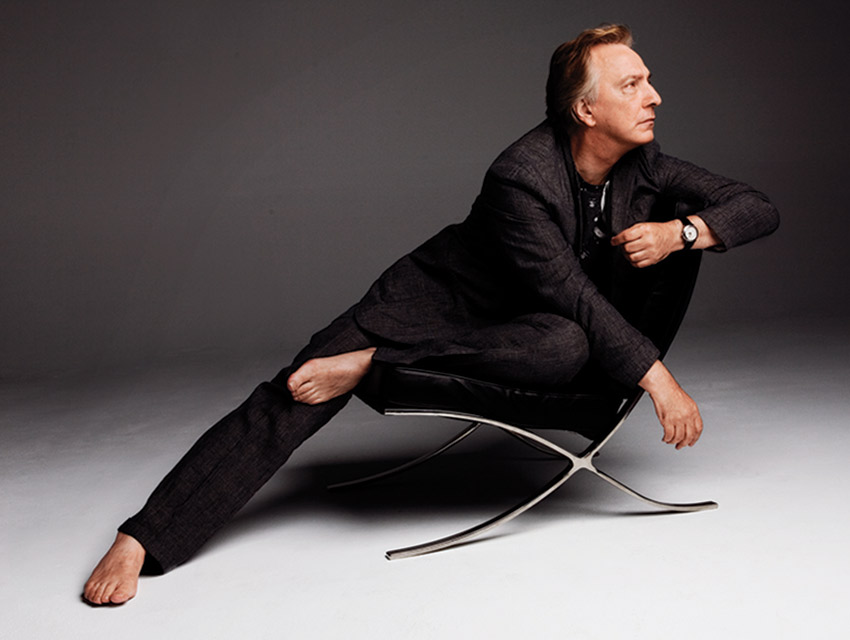 WINE: Alan Sidney Patrick Rickman Reserve
VINTAGE: 1946, London; vines of Irish and Welsh origin
NOTES: Recommended. A warm, dry delivery and cool grace keep everything in balance. Medium body, with silky tannin and plenty of personality. Concentrated and intense, its subtle essences, with just a hint of acidity, add to the deep color of its character. A strong nose and a rich, brooding finish.

Alan Rickman is swirling chardonnay around his glass. “Are you Australian?” asks the sommelier serving wine behind the counter. “No,” Rickman says. “Eeenglish.” It’s quite astounding. A sommelier in Malibu, not 100 yards from a shoreline overrun by celebrities, who doesn’t recognize the actor in front of him. Rickman stands just over six feet, his side-swept hair the shades of caramel and spent charcoal. His zip-up jacket and cargo pants are a faded black, his sleepy hazel eyes hidden behind sunglasses. Before him the sommelier sees just one more oenophile in a day of pourings, not Severus Snape from the Harry Potter films, not Hans Gruber from Die Hard, not Colonel Brandon from Sense and Sensibility. Rickman’s famed voice—so musical, so prone to melancholy or menace—doesn’t instantly recall a ticked-off Bruce Willis or a class full of shaking Hogwarts wizards but is here just another accent on another day.

Rickman has walked in from the sun for an afternoon at the Rosenthal winery tasting room, a nondescript shack on PCH that is offering what the actor will later describe as “some really nice wines.” He’s just returned from Sonoma, where he’s been shooting a film called Bottle Shock that traces the birth of the California wine industry. He’s only in Los Angeles for the day, staying with an old friend at her rental on the beach and then off tomorrow for home, which is London, and then the next day for his other home, which is Tuscany, where he will no doubt drink a crate’s worth of reds and maybe even get in a little grape stomping (and endure the appalling backache that follows). Wine has flowed freely in Rickman’s life, he says, since his days in art school, when he’d show up at a party with “the cheapest guttural. The parties consisted of a bottle of terrible wine, French bread, and a red light in the ceiling. Maybe it was the wine, but I remember little else about them.” It is blood, though, not pinot noir, that will be flowing in Rickman’s latest film, the just-released Sweeney Todd. Tim Burton’s adaptation of Stephen Sondheim’s macabre (“I think ambulances may need to be in attendance at this movie”) and revered musical stars Johnny Depp as the demon barber of Fleet Street, who returns to London to seek vengeance on Rickman’s Judge Turpin, who falsely convicted him and sent him to prison, destroyed his family, and stole his daughter.

Turpin is, like so many of Rickman’s characters, a man of deep complexities—on the surface a monster, but a monster whose cruelty is all too human. Turpin’s attitude toward Sweeney’s daughter “may be inappropriate,” says Rickman, pulling his jacket closed, then folding his arms. “But in his way he loves her, and he’s hurt by her, so you have to play that. One thing you never do is judge the character. Let other people make judgments as to whether they’re immoral or glowing, honest or devious. Good writing always tells you what to do: ‘What does this person want? Why do they want it? How do they go about getting it?’ Don’t try and wipe your ego or your tawdry personality across some great writing.”

Rickman has moved from the chardonnay—“I can’t drink white wine, it makes my head swirl, which is a shame”—to a 2004 mix of merlot, cabernet sauvignon, and petit verdot that is labeled SURFRIDER RED WINE. “That smells nice,” Rickman says, dipping his off-center nose, all narrow ridgeline eagerness, into the glass. “Just calling it red wine? I like that, it’s very honorable,” he says before taking a sip. “That’s delicious to me,” he purrs, leaning in with a conspiratorial whisper. “We’d be happy with that down on the beach, wouldn’t we?”

Costarring Bill Pullman, Bottle Shock is Rickman’s indie based on the true story of an Englishman who, to promote his Paris wineshop, held a blind taste test in 1976 between French and California vintages. “Famously,” says Rickman, “the California wines won with all the French judges, in both red and white, and it opened the doors for not only American wines but Australians and others as well.”

“Oh, that was Steven Spurrier,” says the sommelier, a sweet, portly fellow with a white beard and mustache who has, like anyone who might have sat through a Rickman film, become mesmerized by the actor’s astringent enunciations and expressive mouth.

“That’s who I play in the movie,” says Rickman.

“Oh, you did? That’s very cool,” says the sommelier, now pouring a broad-shouldered 2001 merlot. “That was really a watershed moment. Tell me about this movie. Is it going to be released?”

“Well, let’s hope so,” says Rickman before breaking his pursed lips into a smile, letting out a low chuckle, and downing a swig. “This is good, too,” he says, “but I couldn’t drink this all night.” It was when Rickman had the courage to send back a bottle of wine in a restaurant—not that long ago, he adds— that he knew he’d moved beyond art school swill. The wine had gone bad because of a contaminated cork. “Before that, I drank many a bottle that was corked, and I said, ‘It’s a bit vinegary, but I’ll drink it.’

“I don’t know how to put it in words— that’s the problem with great wine, isn’t it? It’s such an ancient craft. It’s some mixture of nature and art and man, and the earth and all of that, and you’d better just hand yourself over to it. When you put your nose into a glass—and I really don’t know what I’m talking about—all I know is that you smell this thing, and it goes on and on and on, and you taste it, and it’s a roller coaster.”

That’s an apt assessment of Rickman’s career as well. In fact, he describes wine making and acting similarly: They are both “crafts”—imbued with mystery, riddled with hits and misses—that must be religiously honed and nurtured. At the same time, wine makers and actors must “hand themselves over”—whether it’s to an oak barrel that’s about to be tapped or an audience that’s waiting for that first line—and hope for the best. Rickman has taken his share of risky parts (“I’ve had no choice, I wasn’t young and pretty”), and his characters, no matter their screen time, linger on the palate long after they have been sampled.

“One thing you never do is judge the character. Let other people make judgments as to whether they’re immoral or glowing, honest or devious.”

Take Rickman’s breakthrough role, in 1990’s Truly, Madly, Deeply. His character, Jamie, has unexpectedly died and just as unexpectedly returned as a ghost in his girlfriend Nina’s flat. Drowning in grief, Nina, as played by the transcendent Juliet Stevenson, falls into Jamie’s arms again, and the film turns into a fantasy for anyone who has loved and lost. Until, that is, Jamie—perhaps the world’s sexiest phantom cellist—and his group of friends who linger between the living and the dead overtake the flat, and Jamie overwhelms Nina with his controlling and annoying ways. We still love him, but at story’s end, we’re ready for her to move on—and so is she— and that’s because Rickman has subtly led us there.

Rickman learned the ins and outs of emotional language, how not to rely on the cinematic close-up and to become comfortable with the quiet, from his early stage education. “When I left drama school, you had to spend two years in repertory theater,” he says, having taken a quick diversion from the planned tasting menu with an offered sip of a potent 1970 burgundy that better recalls a 1970 brandy. “I wasn’t allowed anywhere near a film camera or the West End. That was a union rule. Thank you, Margaret Thatcher, that has all been disbanded. Now young kids in England come out of drama school and go, ‘Sir, I want to be a movie star.’ ”

Love Actually, Perfume, Galaxy Quest, even Robin Hood: Prince of Thieves—all performed well at the box office, but it is thanks to the Harry Potter films, the last of which grossed nearly $1 billion worldwide and none of which the actor will discuss for fear of spoiling the illusion for children, that Rickman has become a star—of sorts. It is the roles in which he must confront audience prejudices—as the divisive Irish prime minister Eamon De Valera in Michael Collins, say, or as the title character in Rasputin— that compel Rickman to “put your boxing gloves on in behalf of” the characters. The acclaimed play he coedited and directed in 2005, My Name Is Rachel Corrie, was based on the writings of the American girl who was crushed by a bulldozer while protesting the demolition of a Palestinian house in Gaza. “I’d read her e-mails in the Guardian and thought, ‘It can’t be its only life, this one day in a newspaper,’ ” Rickman says. “She was a great American patriot.”

His last sip for the afternoon—scheduled sip, that is—comes from a fruity and crisp 2001 cabernet sauvignon that sells for $35.“That’s delicious. I think I should take some back to my hosts. Can I have three of those?” he asks the sommelier, who begins to ring them up but won’t let him leave before he tries the 2000 vintage, which stylistically tastes more like a Bordeaux. “I don’t know,” Rickman says, reaching for his wallet, “what I’m drinking anymore.”