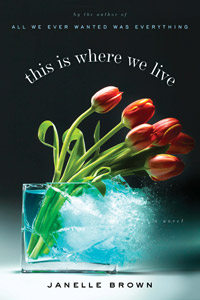 Was it really only two years ago that I was at Skylight Books to hear author Janelle Brown read from her first novel? Last week, as I sat in a crowd of friends and fans gathered to hear Brown read from her latest book, This is Where We Live (Spiegel & Grau, $25), it dawned on me that she just might be the most masterfully (superhumanly?) efficient writer in L.A. After all, in a couple of years, Brown produced not only a full-length novel, but also a baby (with epically good timing, her daughter, now ten months, was born the day after she turned in her manuscript). Brown, a Northern Californian who made her name as a journalist writing for The New York Times, Vogue, and Wired, among others, published All We Ever Wanted Was Everything in 2008. It parsed the moneyed, well-manicured lives of Silicon Valley’s best and brightest just as the bubble was bursting, and was a bestseller. This novel looks at a similarly chaotic moment in time, when a young married couple (artistic, liberal, local—he’s an indie rocker, she’s an indie filmmaker) must deal with the toll a crumbling housing market takes on their lives, both financially and emotionally. “This book hits a little closer to home than my last one,” she told the crowd. “It was inspired by the people around me in Los Feliz” (it’s set in 2008 in Mt. Washington). “I was definitely a little concerned about people being like, ‘ugh, you got that wrong.’” To insure against that, Brown, who lives in the area, interviewed several other Angelenos for the project, including air guitar champ Dan Crane (in attendance Tuesday night) and a teacher at Harvard-Westlake, whom she also shadowed for a day. Afterwards, the crowd headed over to Rockwell Bar down the street for drinks and a well-stocked buffet (“I didn’t want my guests to be crowded around a single bowl of dip!” said Brown). As we sipped Mojitos (and I accidentally took a swig of hers—oops), I asked her why her books explore periods of chaos, both in her characters’ lives and in the outside world—what’s the draw?. “It’s much more interesting to write about the major social transitions of our generation,” she tells me. “Stability is boring.”